BARRY BOYCE
“I now belong to a higher cult of mortals for I have seen the albatross.”
Robert Cushman Murphy, 1912

These were the words that Robert Cushman Murphy wrote (to his newlywed wife, Grace, back home) in Logbook for Grace: Whaling Brig Daisy, 1912-1913.  Murphy was to become an eminent ornithologist and  the author of over 600 publications about birds.  But in 1912, he was  a graduate student given a year-long berth on the whaling vessel just prior to his marriage. The job was a once-in-a-lifetime opportunity to observe seabirds and would lead to his Doctorate degree and a bright future, but he was heartbroken to begin the marriage on that note. One of his descendants was a passenger of mine and sent me a copy of the book, which I cherish.

Murphy's words ring true, for the albatross is truly remarkable.  They are long-lived (to 50 years in some species, compared to 20 years for most sea birds).   They spend most of their lives at sea and can spend over  a year without touching land, actually sleeping with a part of its brain (while the other part navigates);   they do rest on the ocean surface.  For most birds, flying comes at a cost; there are no  discount tickets on the internet. It’s very energy-consuming, using 10-15 times as much energy as resting. At least for most birds, but not so for the albatross; it has a special tendon in its shoulder area that allows it to lock its spread wings in position and glide, using very little energy. If you were going to design an aircraft for the Southern Ocean (the area south of where the Atlantic, Pacific, and Indian Oceans meet), it would be a glider, because you have several thousand miles of uninterrupted fetch (meaning continuous, wind-swept ocean). The albatross is a glider; it scores A+ ingliding; in take-offs and landings, not very good marks. So albatrosses can travel several hundred miles per day; we know this as we’ve implanted GPS units on them and can trace their migratory movements. At night, they will rest on the ocean; this is the time when  their preferred food, squid, rises to the surface to feed on their preferred food, plankton, which has also
​risen to the surface.    If you’re going after squid, night time is the right time. 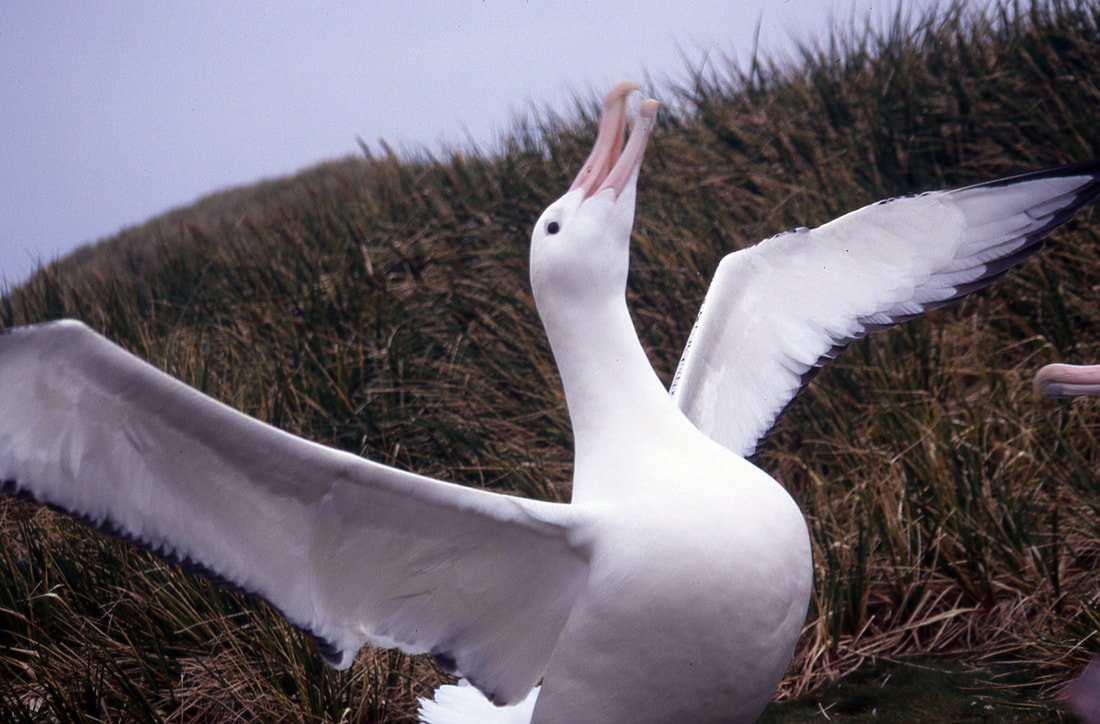 The sub-Antarctic island of South Georgia is one of the best places in the world to observe seabirds;  if at all possible, choose a longer trip to Antarctica, one that includes South Georgia. It has a lot of history as well, including Shackleton, who is buried here.  This is where  one has the possibility of seeing  the Wandering Albatross during courtship, where the male faces the female and slowly circles around her, all the while keeping his 11 ft. wingspread totally spread open. It’s an amazing show, and makes for great video. The Wandering Albatross is one of my favorite birds, and it is in a class of its own. ​I remember from my Antarctica guiding days, I would state that the wingspan of the Wandering Albatross was over 11 ft. I’d look at the group and see blank faces, and after a few trips with the same reaction, it dawned on me; people somehow couldn’t register 11 feet at the gut level. That had to be it, I figured. So during my next lecture, I stated the maximum wingspan of over 11 ft. and then asked a guest to stand in the corner of the room. I then handed her one end of a piece of string and I moved away from her until the 11 foot piece of string was taught. “This,” I declared, “is the length of the wingspan of the Wandering Albatross.”
​
The “oohs” and “aahs” came from everywhere. This is when I realized that if 11 ft. was difficult to imagine,
I would have to totally change my "Scale of the Universe" lecture. Which is another  story. 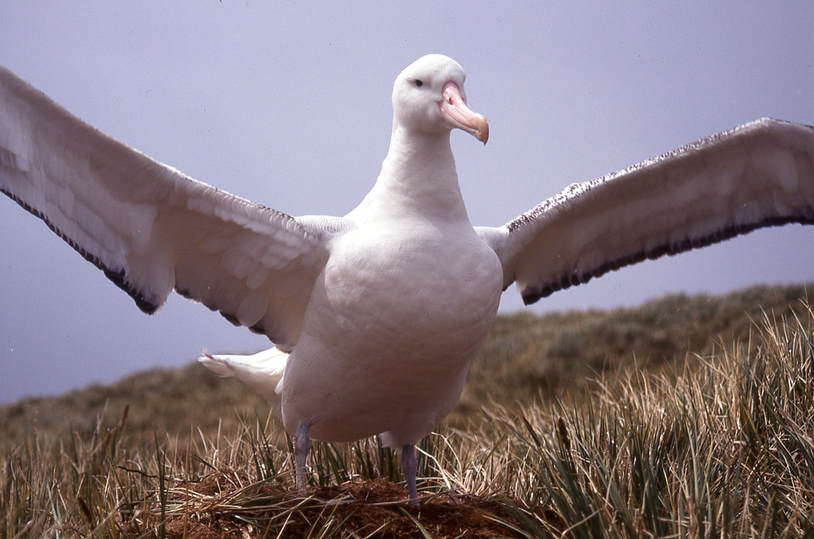 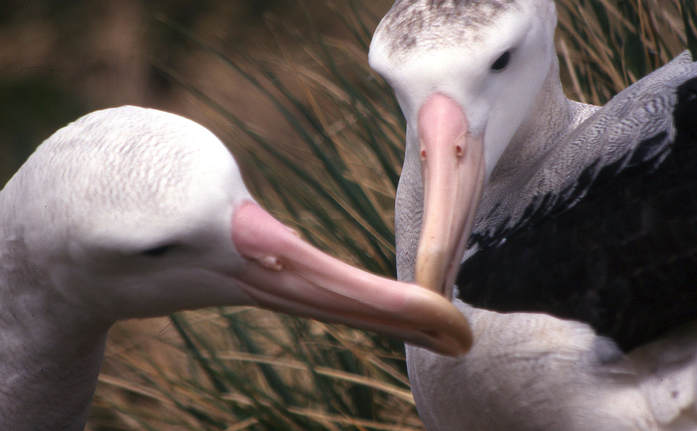 Albatross are tube-nosed birds.  Technically this is an Order of seabirds (termed Procellariiformes) that have, among other characteristics, a nasal salt gland that connects to a central opening, or tube,  on their upper beak.  Through this tube, concentrated saline solution is excreted and can be  seen dripping from their bill. In addition to the albatross, which actually have 2 tubes ( see above) other tube-nosed birds include the petrels, storm petrels, and shearwaters.  For sea birds and some reptiles (such as the Galapagos Marine Iguana) getting rid of salt in this manner is more energy-efficient than having to find and  drink a sufficient quantity of fresh water in order to produce urine.  What isn’t obvious at first is that almost all sea birds have a nasal salt gland and excrete salt without having the tubes. The question being, “does  the tube  have another function”?  Apparently it does and it is related to sensory enhancement (in the sense of smell) to enable them to navigate, locate food, and find their nests (on land).  The details are still being worked out, and the tubes themselves are now called tubular nostrils. 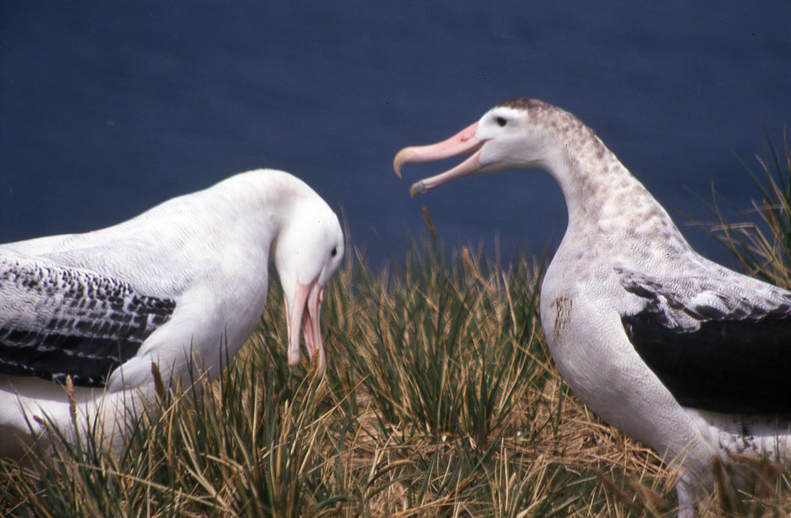 While many birds are monogamous, very few mate for life.  In many seabirds (penguins are a great example), there is more fidelity to the nest site and to the time of arrival than there is to the mate from last year. With a short breeding season and a limit of  somewhat protected, ice-free, and close to the water nest sites, this makes sense. As in virtually all species, some pairs are more successful than others, which in turn influences whether they reconnect next year. For the albatross, the vetting system is comprehensive, and once a mate is selected, it is generally for life. The courtship is a series of well-notated dance steps, involving the wings, bill clicks, and head movements, including gapes. The sub-adults and young adults actually go to a "dancing school" where they practice their moves; sometimes several can be seen together going through these steps, which can be somewhat humorous and heart-warming as well. 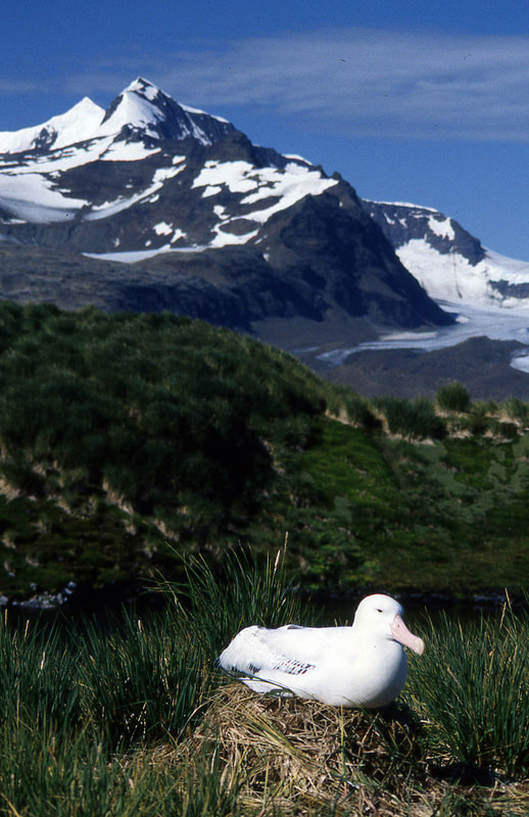 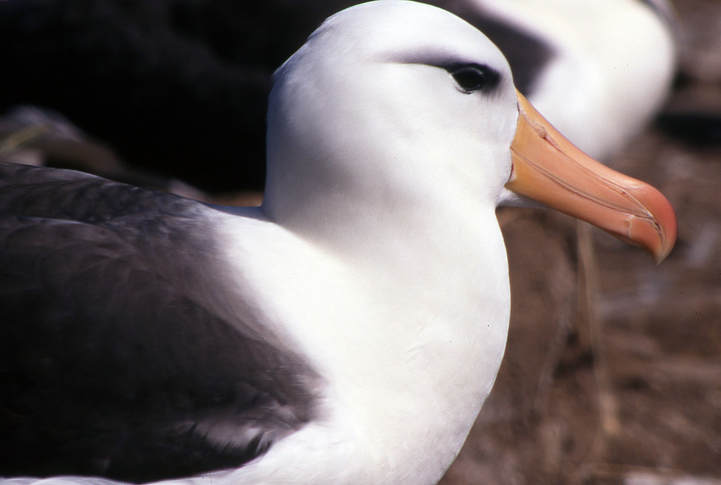 The Black-browed Albatross is well-named, with its dark eye and eyestreak  giving it a frowning appearance.  Its head is all-white and the golden beak has a downward-curved pink tip. It’s a medium-sized albatross (often called "mollymawks"), with a 7-8 ft. wingspan.   The word mollymawk dates back to the late 1600s, from the Dutch "mallemok", meaning foolish gull.  The black-browed is the world’s most numerous albatross, with numbers of over one million birds; a large percentage (well over half)  nest in the Falkland Islands.  Due to the takeoff boost needed due to their large bodies, albatrosses typically nest on hillsides or cliffs (2 photos up); with the windswept climate of the Falklands, the Black-browed Albatross here nest in large noisy colonies (below).  These nests are a mound crafted out of nature's finest - mud, guano, seaweed, and tussock grass;  the nest are often reused annually.

As pointed out, albatrosses feed from the surface, often at night when the squid and other prey rise from the depths. The downside to this is longline fishing, which has taken its toll on the albatross population. These lines are 10s of miles long, with baited hooks every 3-30 feet, depending on the fish they’re after. A lot of these lines do not carry sufficient weight to sink them a few feet and the bait is then taken by albatrosses – including the black-browed. There is a serious battle going on to outlaw longlining in certain regions or to force the fisherfolk to use the heavier weights; it’s a matter of cost, as always. 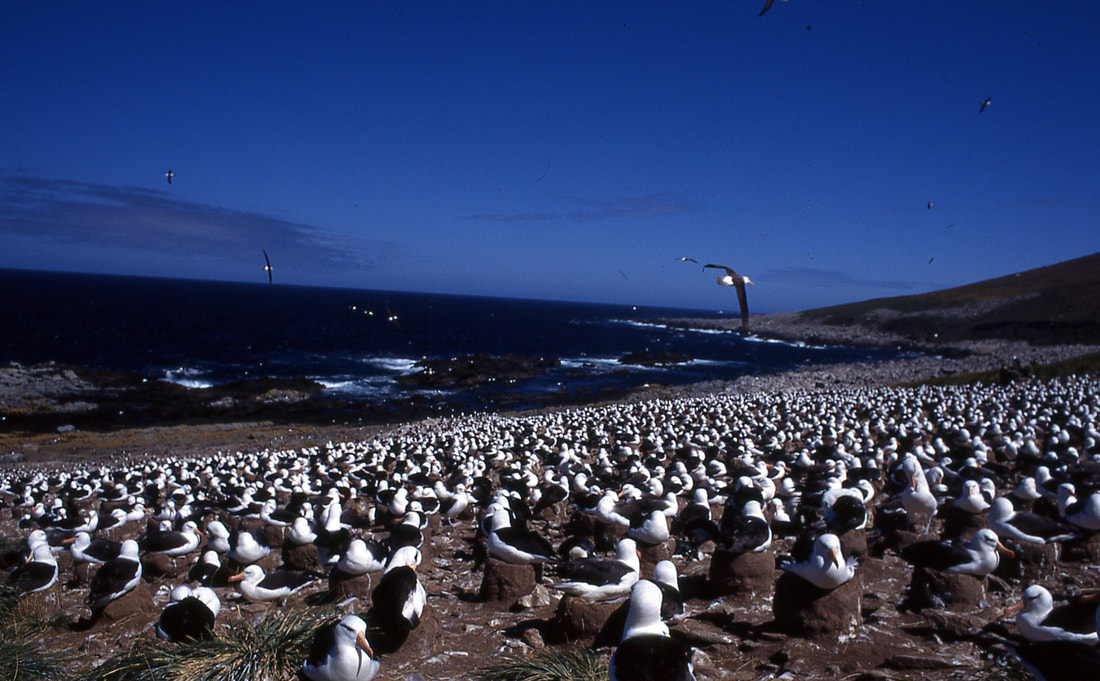 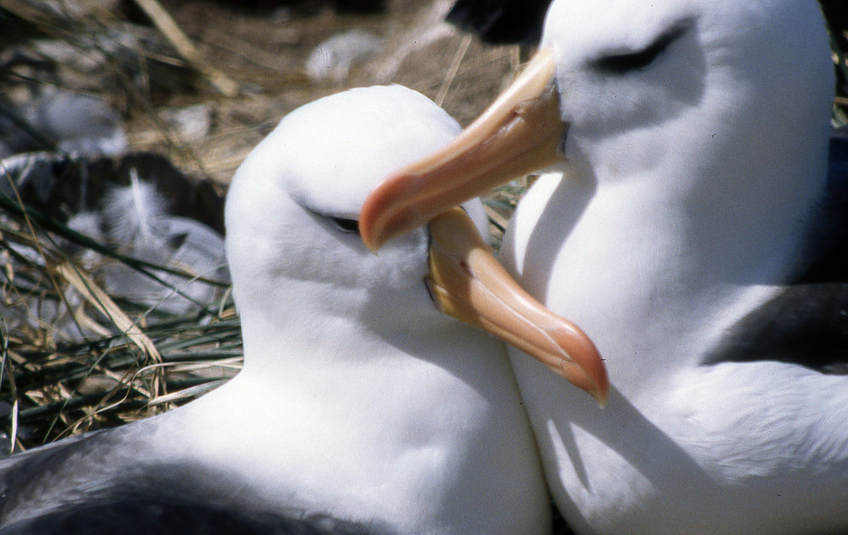 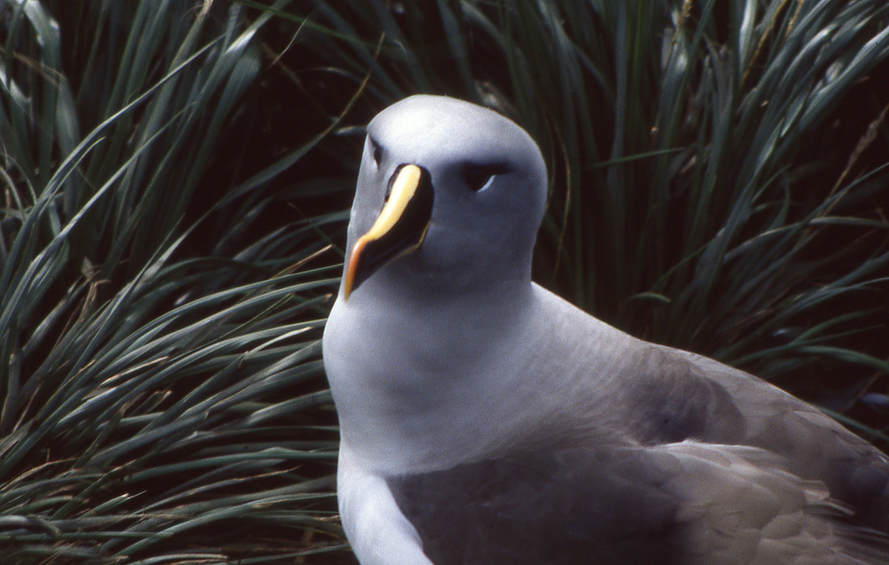 The Grey-headed albatross is another mollymawk, a medium sized albatross with just over a 7 ft. wingspan;   the gold outline on the blackish bill gives them the name of "gold-mouthed mollymawk".  Grey-headed Albatrosses nest in colonies on several sub-Antarctic islands in the Southern Ocean, with a large population on South Georgia Island, where these photos were taken.  Maintaining speeds of 75 mph, they are considered as the world’s fastest “horizontal flier” (other birds, such as falcons, can dive faster). They are pelagic (open-ocean, as opposed to continental shelf) feeders, travelling over 8,000 miles in extended trips. We’ve got GPS sensors on some to actually document these distances. 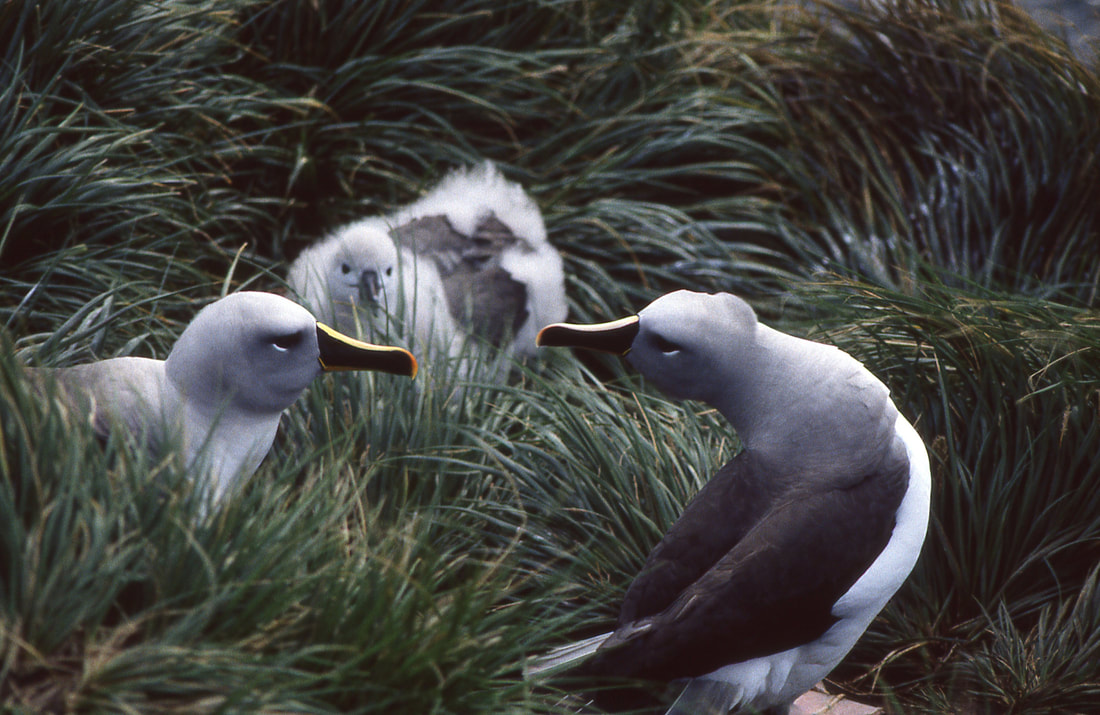