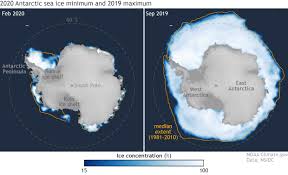 February on the left; September on the right
ANTARCTIC ICE
​Beautiful, Powerful, Awesome, and (as our Climate is) Extremely Fragile.

In Polar Regions, pressurized (compressed) multiyear accumulations of terrestrial ice near the coast are called Glaciers. Glaciers that extend and cover large landmasses (as they do in Antarctica and Greenland) are called Ice Sheets.  Extensions of the coastal portions of glaciated Ice Sheets are called Ice Shelves. In turn, the Glaciers and Ice Shelves occasionally calve off  into IceBergs. The present Antarctic Ice Sheet (over 1.5 miles thick) accounts for 90% of Earth's total ice volume and 70% of its fresh water. It actually contains enough water to raise global sea level by 200 ft. if completely melted - an impressive,  scary thought. Off the coast, the sea surface freezes seasonally and becomes Sea Ice.  The Sea Ice maximum in September gives Antarctica double the area that it had during Sea Ice minimum in February (see photo at right). 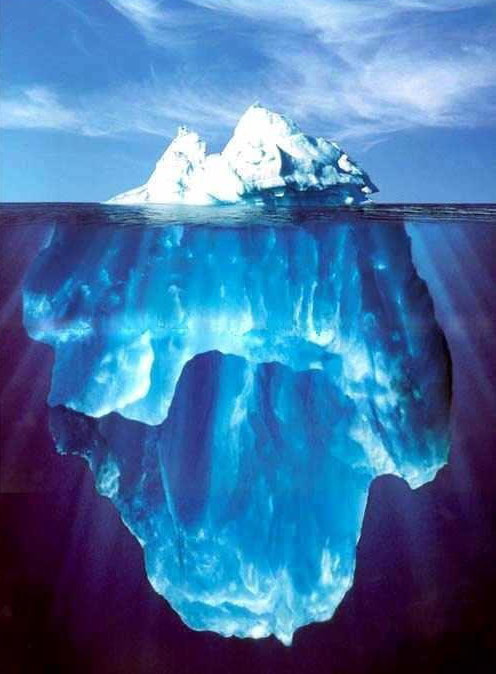 The density of ice is 0.92 g/cc, and the density of water is 1 g/cc (1.03 for salt water). This means that ice has about 90% of water's density, and so 90% of the Iceberg is below the water's surface.  The dramatic image above is rendered for effect, while the photo below, also dramatic, is one I captured with a fisheye wide angle lens. 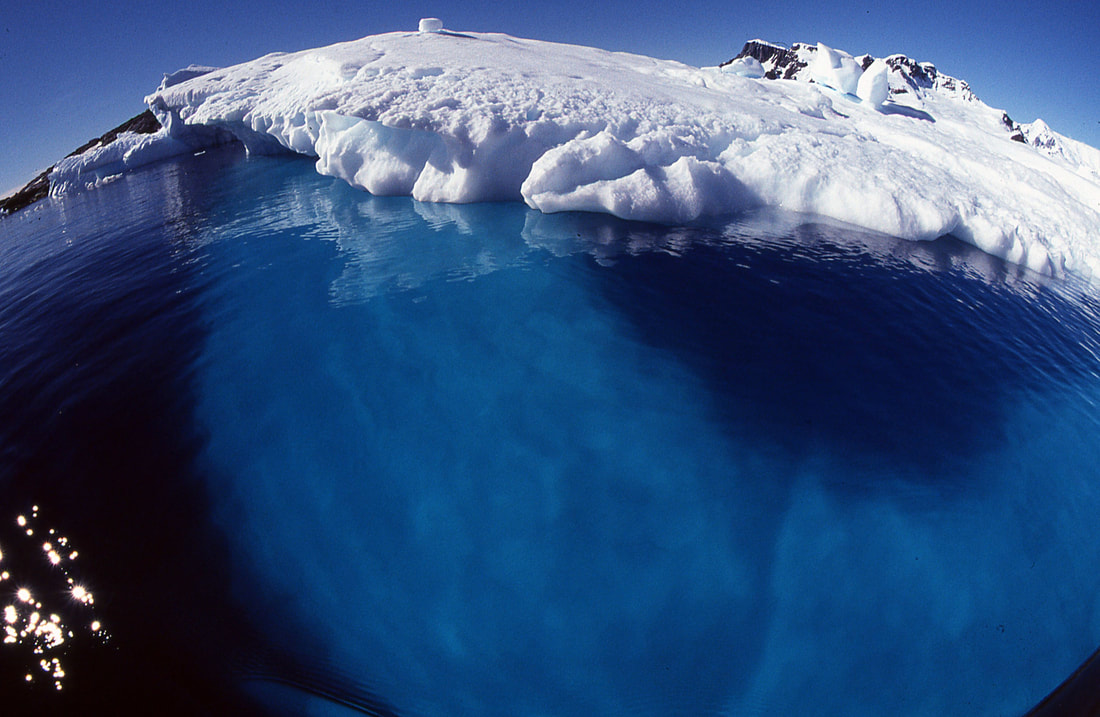 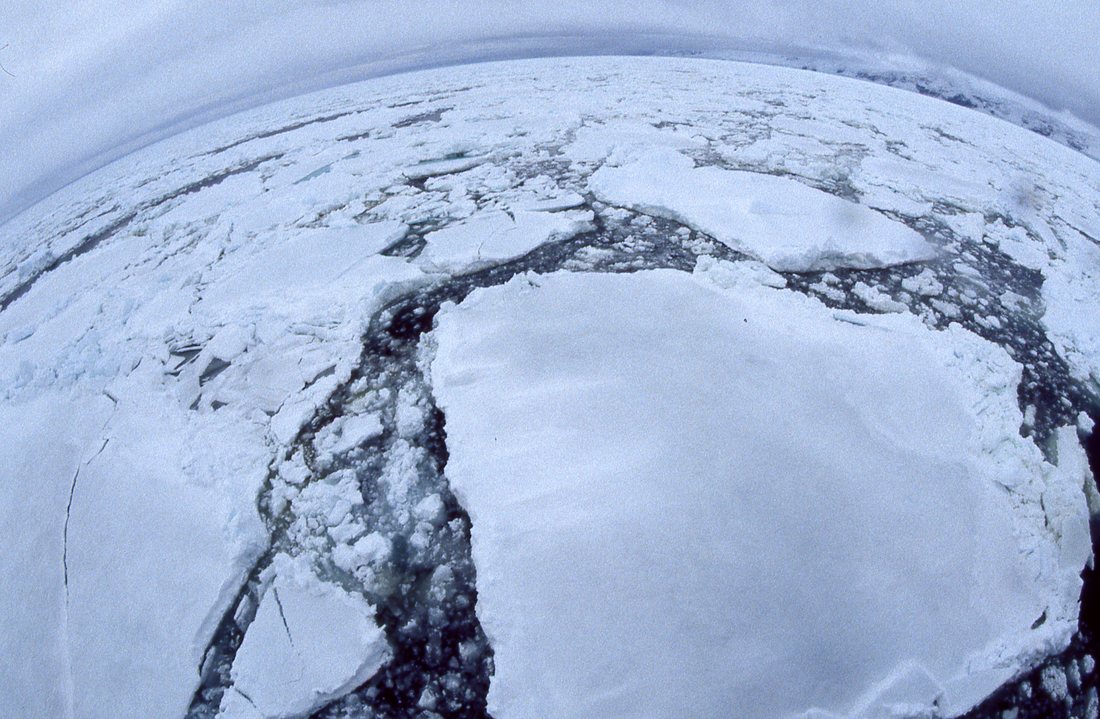 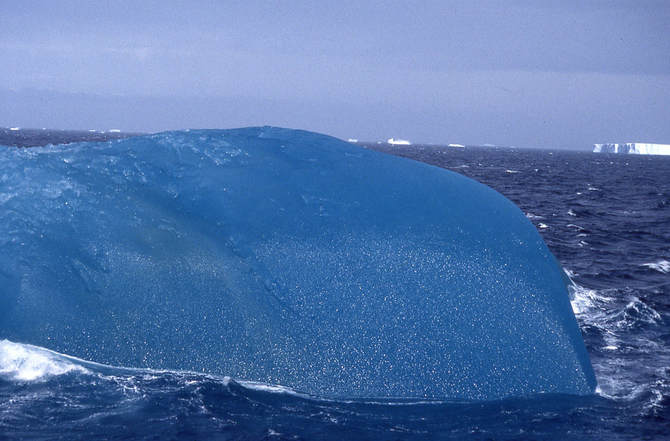 Over time, the pressurized glacial ice compresses more, and entrapped air bubbles are crushed. As a result, more light is absorbed, darkening the blue. There's a bit more to it, but that's the general idea. Beautiful! 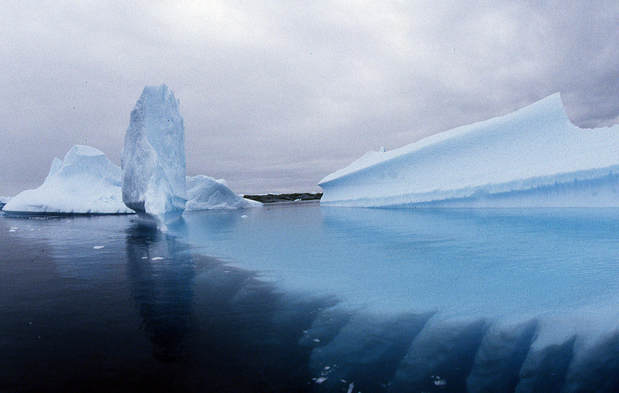 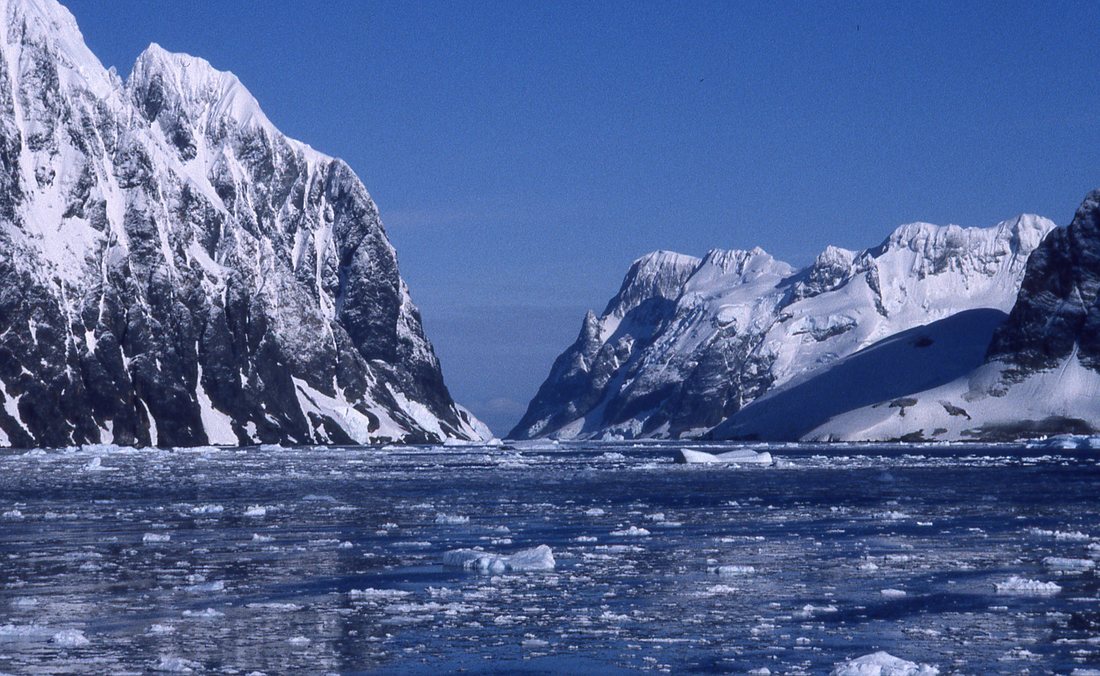 The awesome narrows of the Lemaire Channel. In the days before digital photography (can you remember back that far?), Naturalists would refer to this area as the Kodak crack or the Fuji fiord.
t 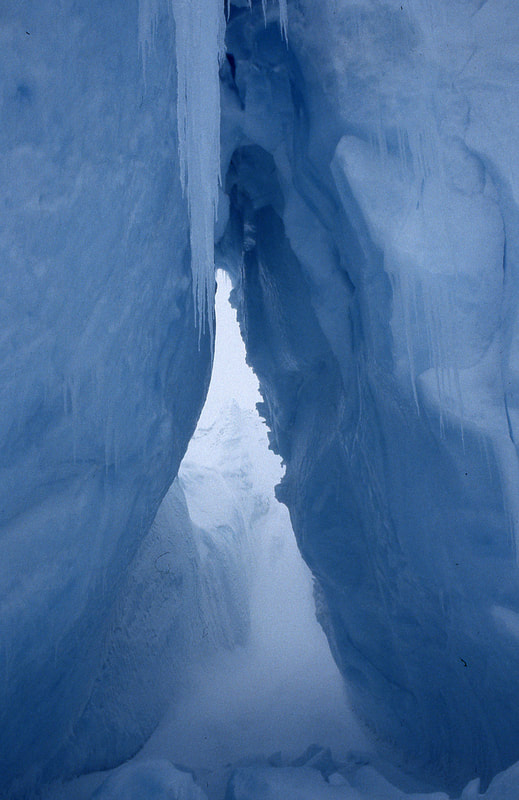 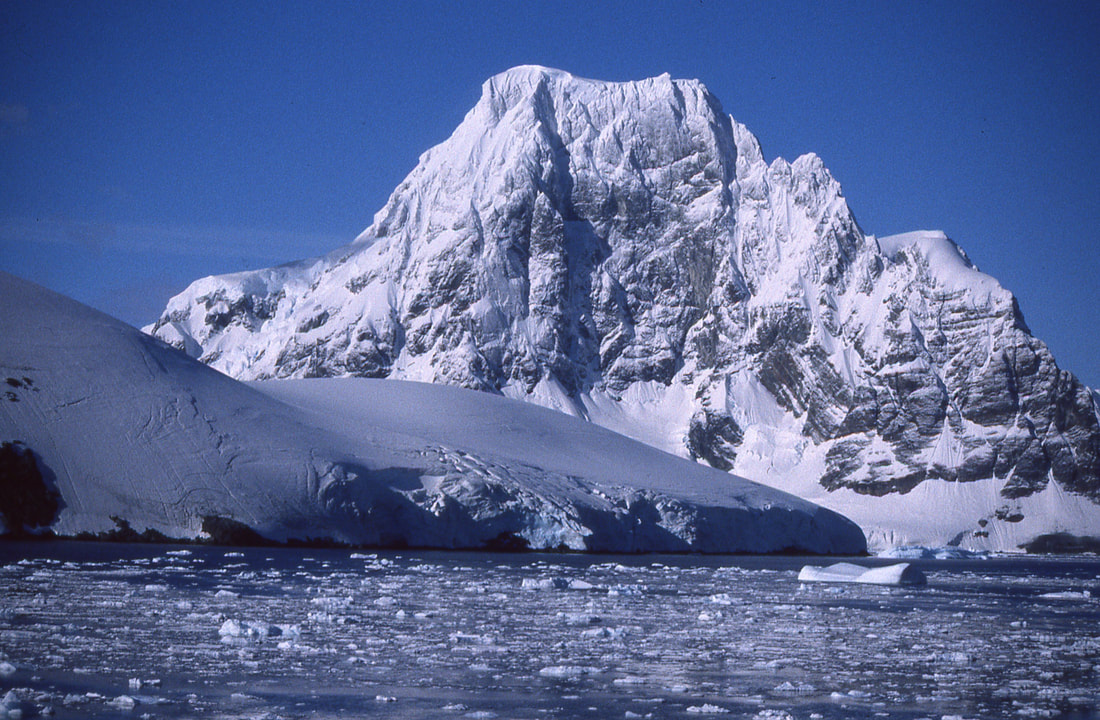 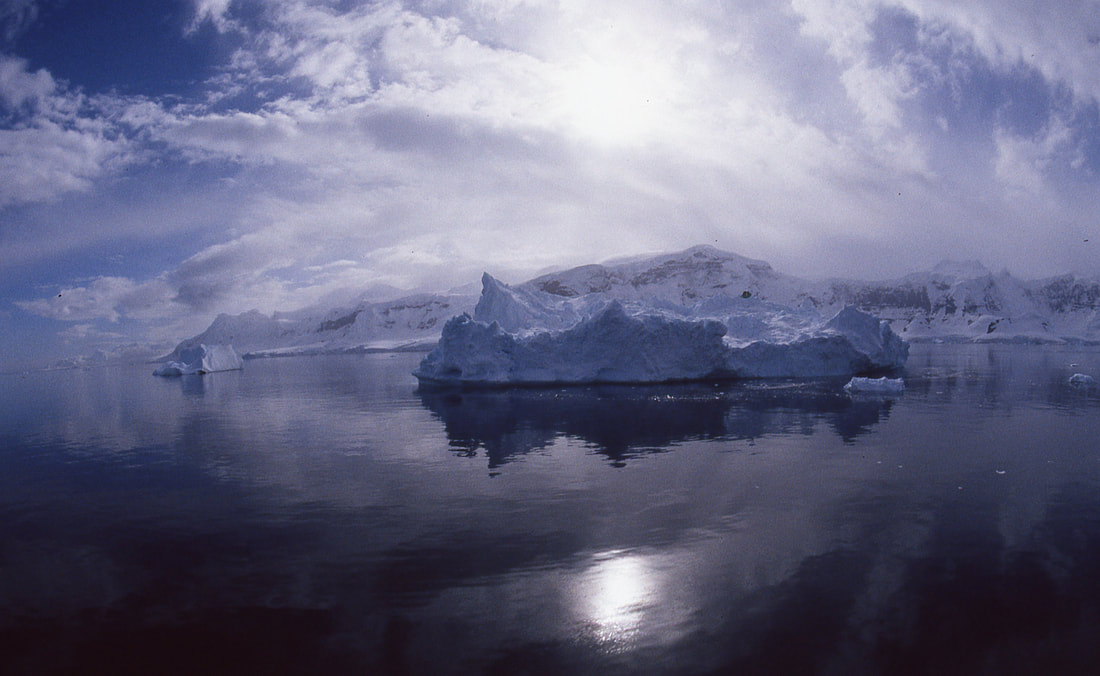 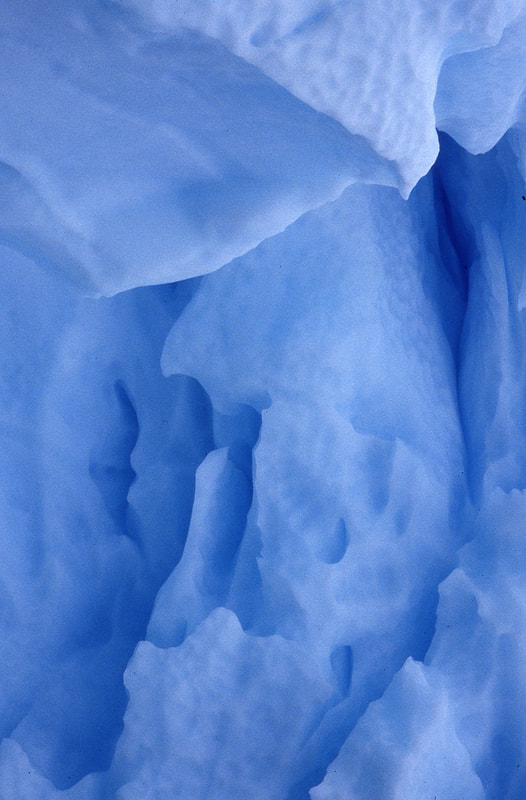 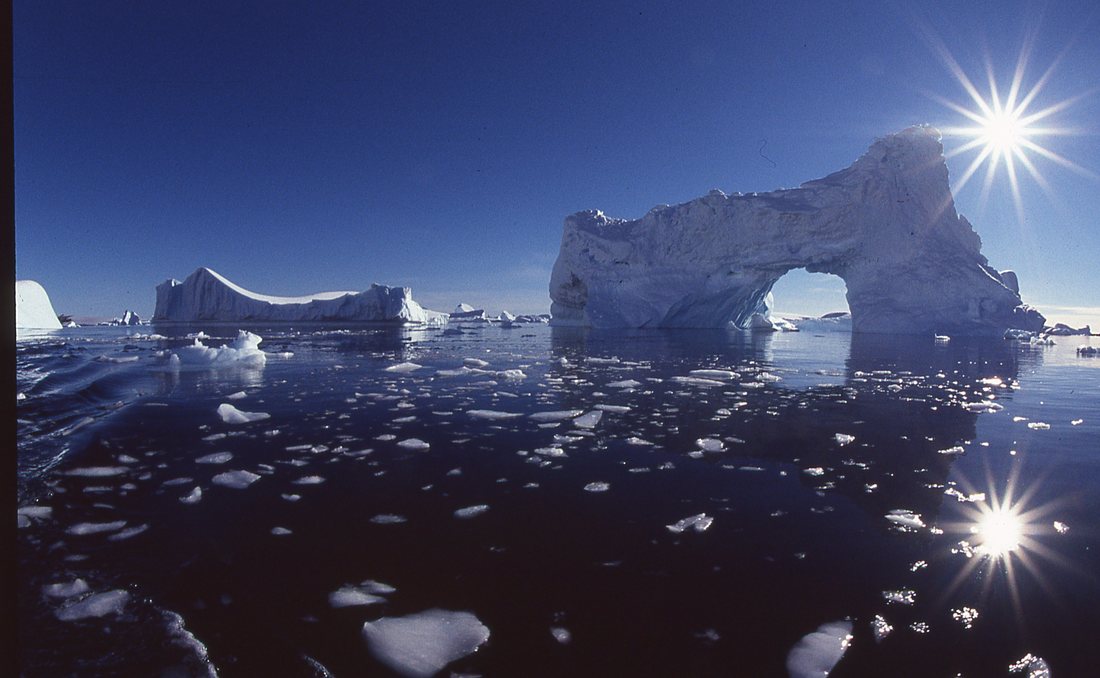 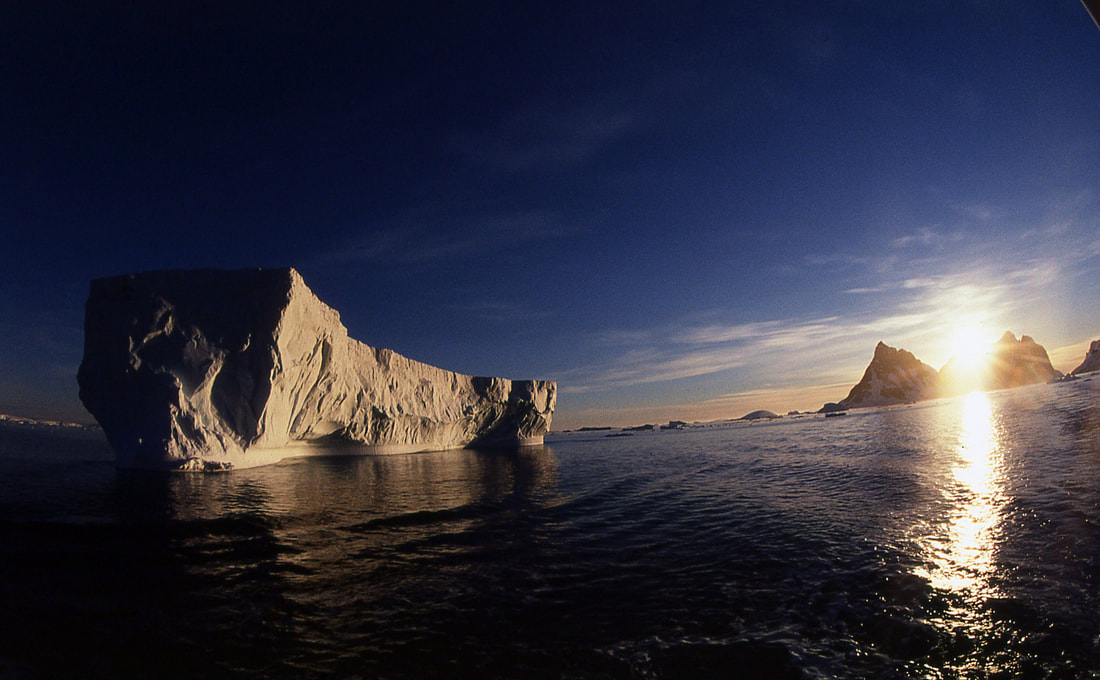 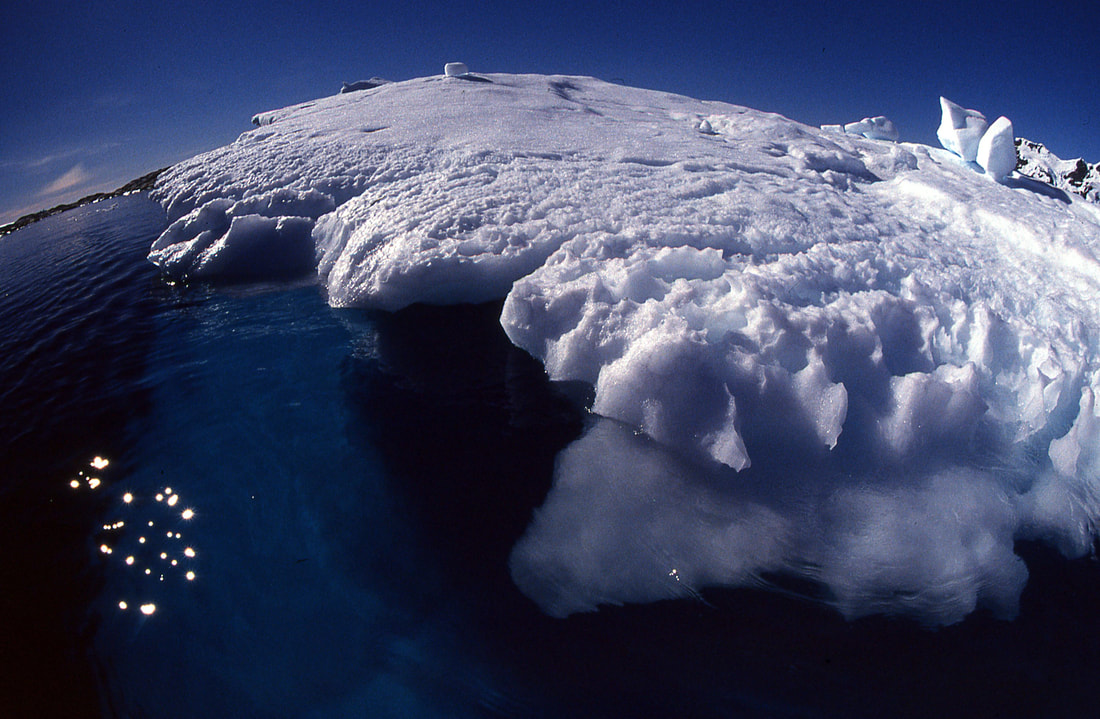 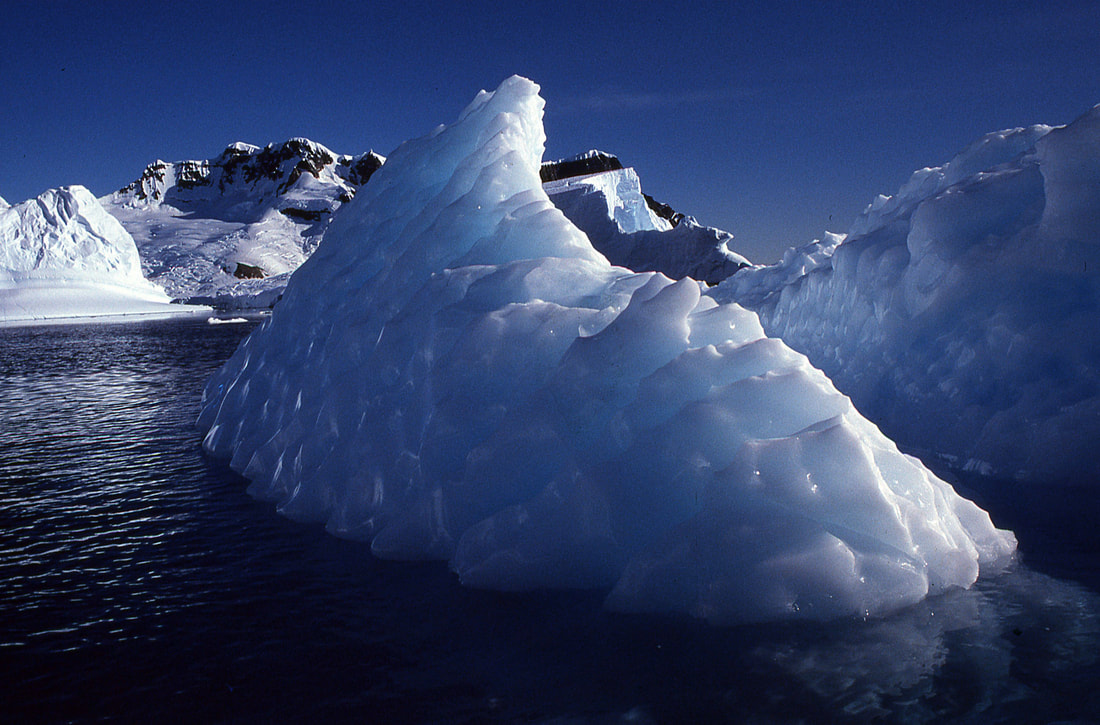 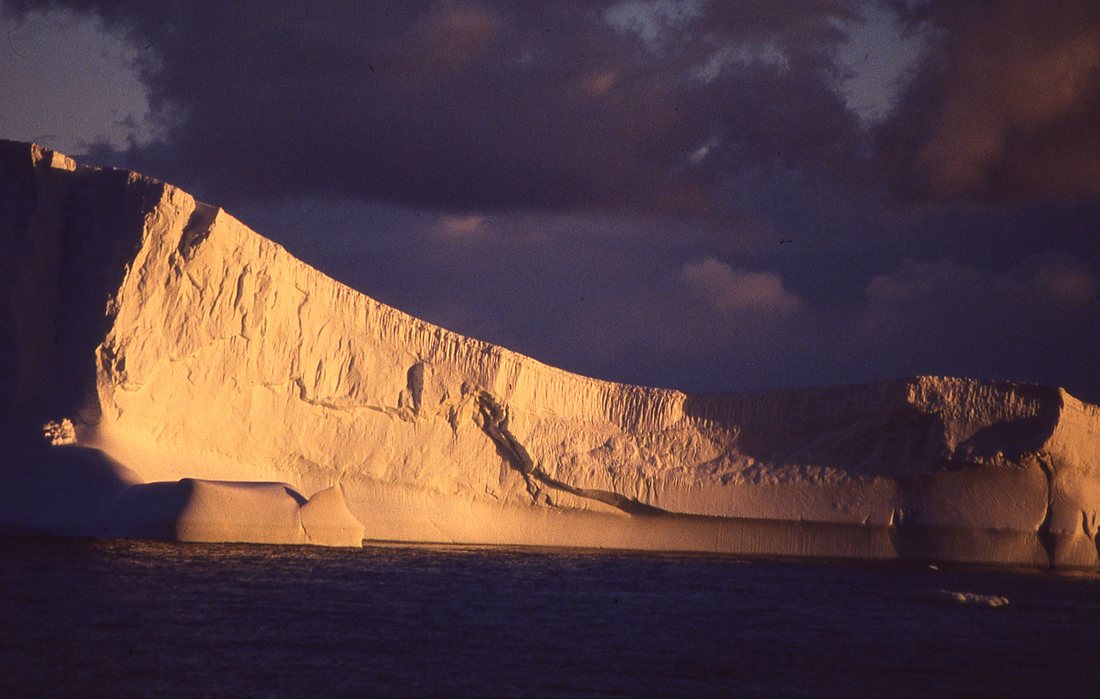 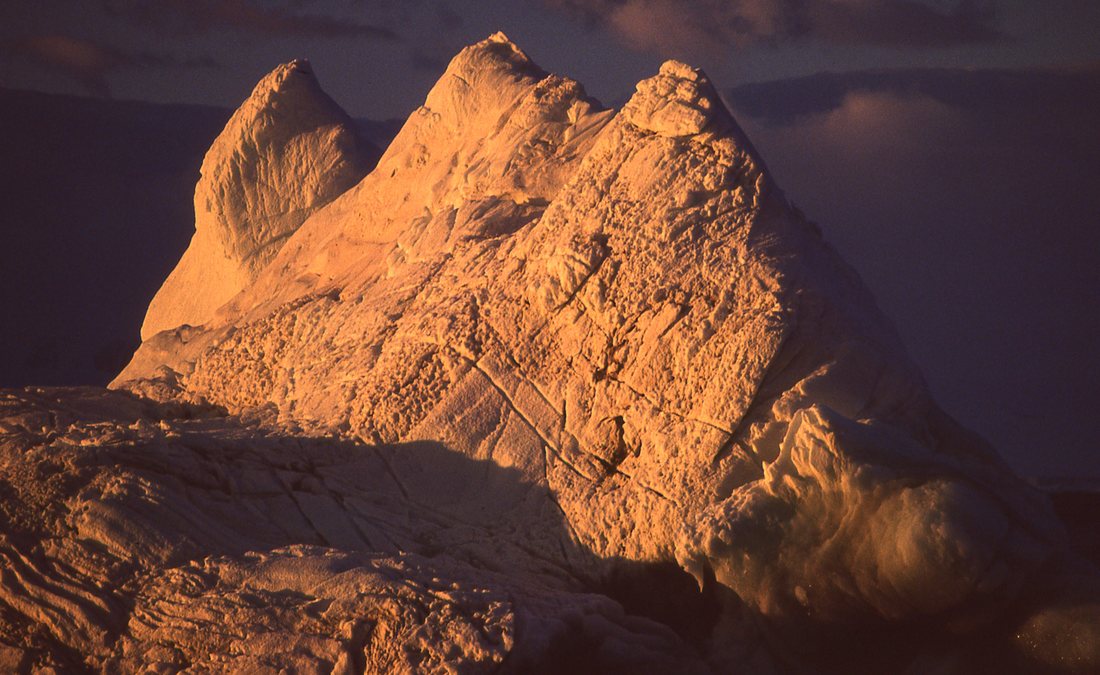 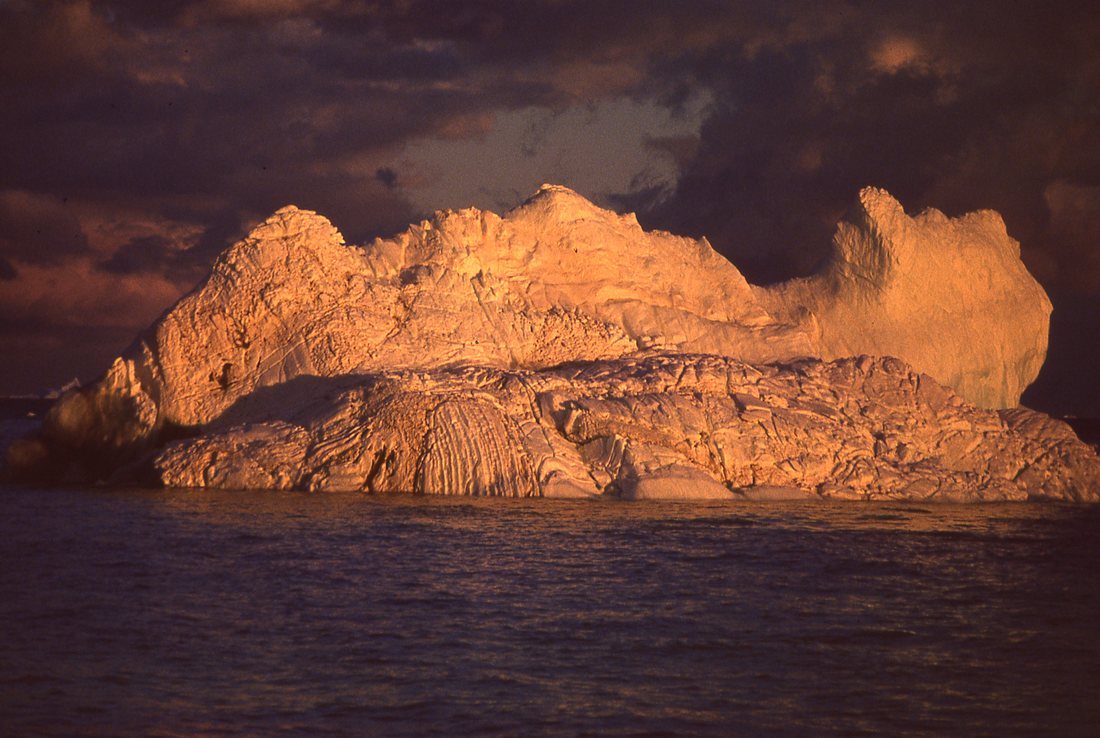 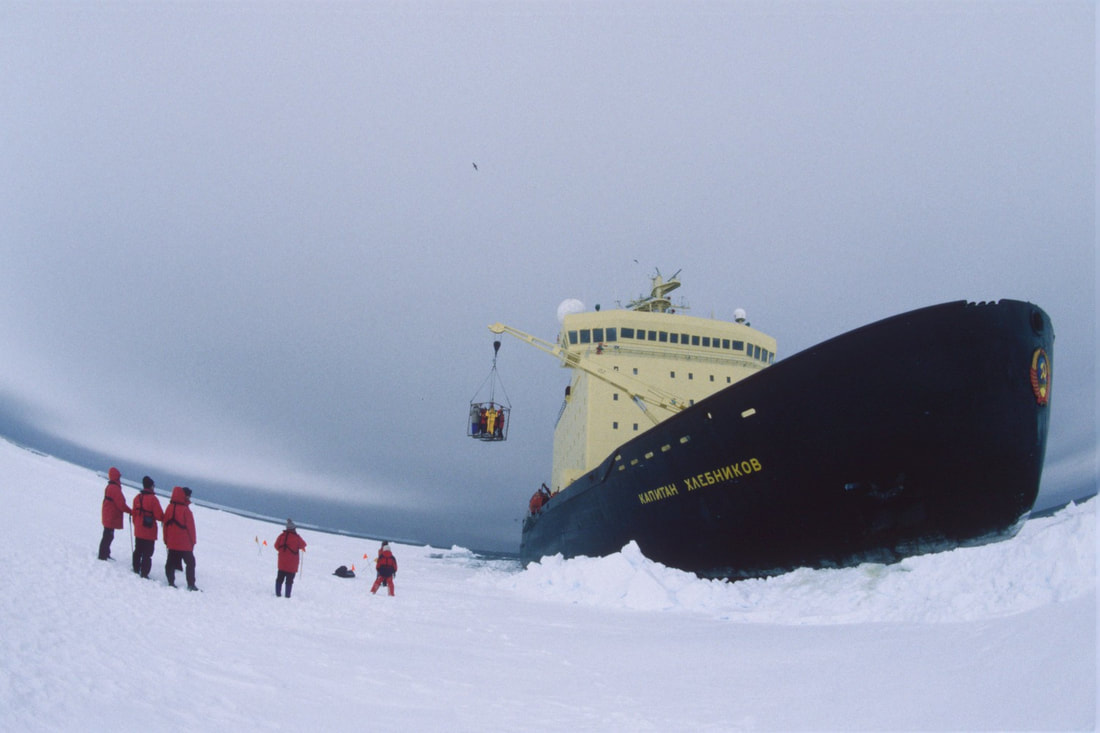 The nuclear icebreaker KAPITAN KHLEBNIKOV is disembarking passengers in an unusual manner - via its cargo cage. The location -  an Antarctic Iceberg, and no other means of "landing" were safe or even possible. The flags in the photos indicate the location of a dangerous crevasse; expert mountaineers designated these areas to avoid.  This was definitely a once-in-a-lifetime adventure for all of us. 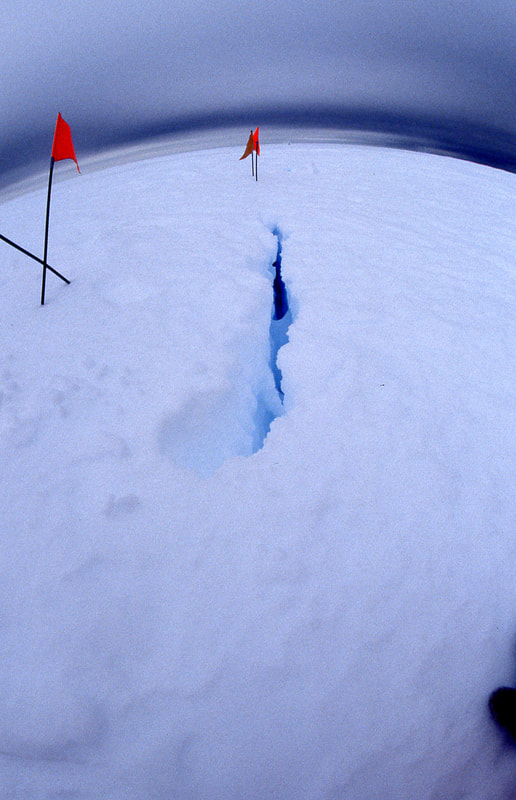 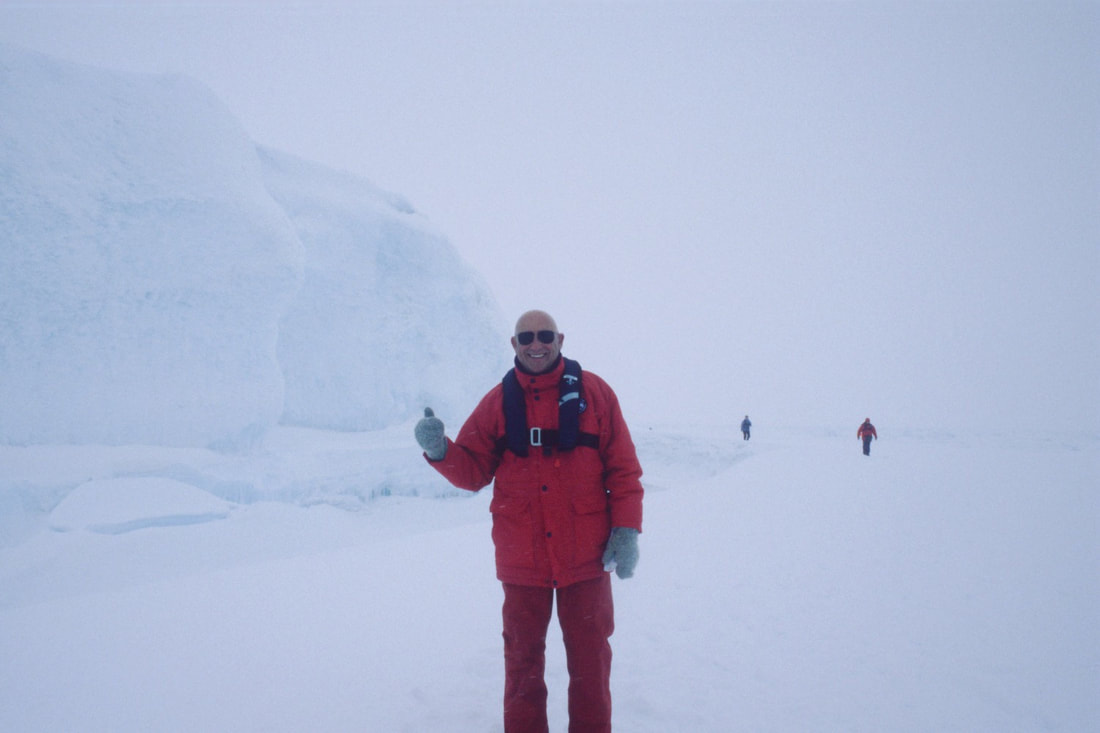