BARRY BOYCE
Did you read how efficient the albatrosses are in gliding? Good, now you are ready for the cormorants who go by the grand name of "shags" down under.  Well, the cormorants are not efficient sliders at all;  unless there's a storm-force wind, you won't see them gliding. It takes all they can just to fly. They are forever beating their wings and stay close to shore. Lost mariners were glad to see them, because it meant land wasn't far off.  So, as they say today, what's up with that?

Evolution rarely works in perfect circles;  there are compromises along the way, using the parts you have to get the job done . . . or not.  Cormorants are diving birds;  the deeper they can dive, the more chance they have of getting food and making it through a bad year, when the oceans have warmed - a NINO or ENSO year.  Most birds have hollow bones, for more efficient respiration and less drag for flying. But with hollow bones, you can't dive as deep, so cormorants have solid bones. Better for diving; not so good for gliding. In addition, seabirds "waterproof" their wings by constantly preening themselves with an oil from a gland located near the tail. But the more oil on your wings, the more buoyant you are. So cormorants use a minimum amount of oil to enable them to dive deeper. That's why use see them drying their wings so often, which also helps in thermoregulation. 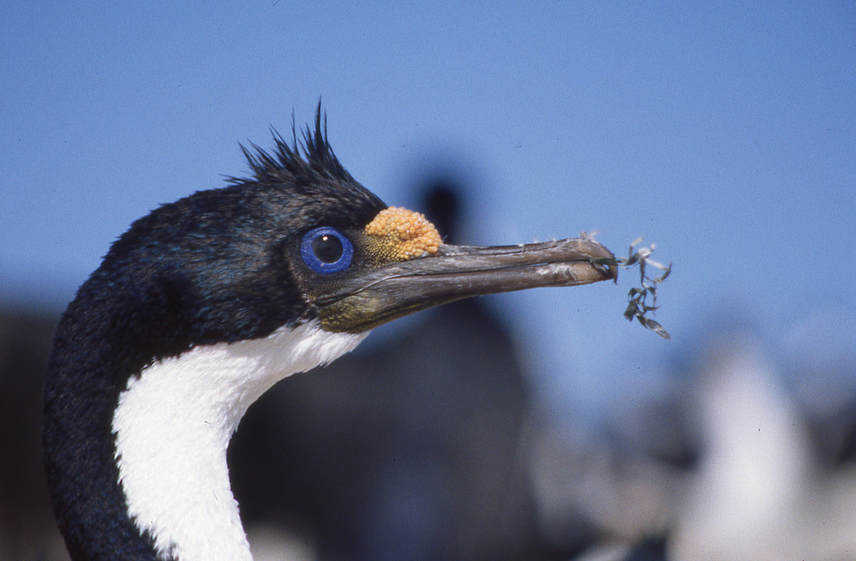 The blue-eyed cormorants/ shags are a group of closely related taxa. Speciation is a difficult science. Today, the term “species” itself is called into question as there is most probably  a continuum of phenotypes/ genotypes rather than the discrete stops that taxonomy requires. These shags all have a blue or purple ring around the eye (it’s actually the skin that’s colored),  a  white “belly”, dark backs,  and pink feet.  You’re probably wondering what those orange growths are in the nasal area; those fleshy outgrowths are known as "caruncles". They may have had some other function once upon a time, but now they are more or less used in courtship to attract a mate, and the coloration and size intensifies in the breeding season;  they are known as sexual characteristics, as the crests and bright seasonal plumage in some birds.

Blue-eyed Cormorants are found throughout the sub-Antarctic islands, choosing nest locations that are ice-free throughout the year;  there are vast colonies found in the Falkland Islands (below). Their nests are elaborate mounds (for protection of the chicks) of seawood mixed with mud; they are fortified and reused annually. They also feed colonially, more like a pack. They dive from the surface in groups, frightening the prey to the surface. 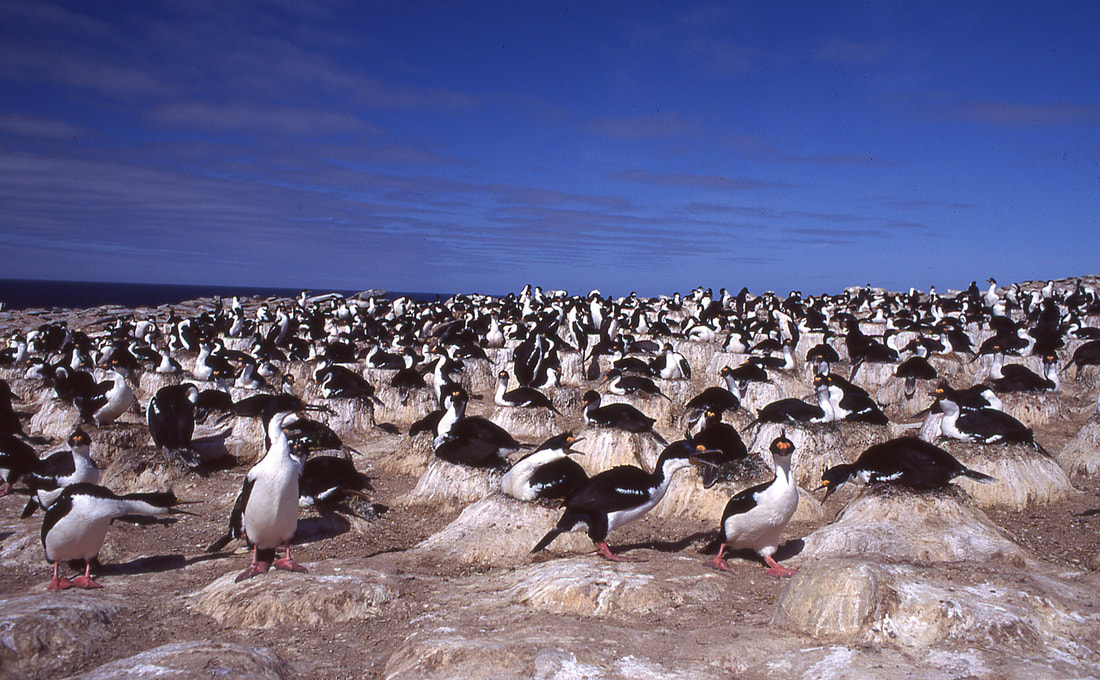 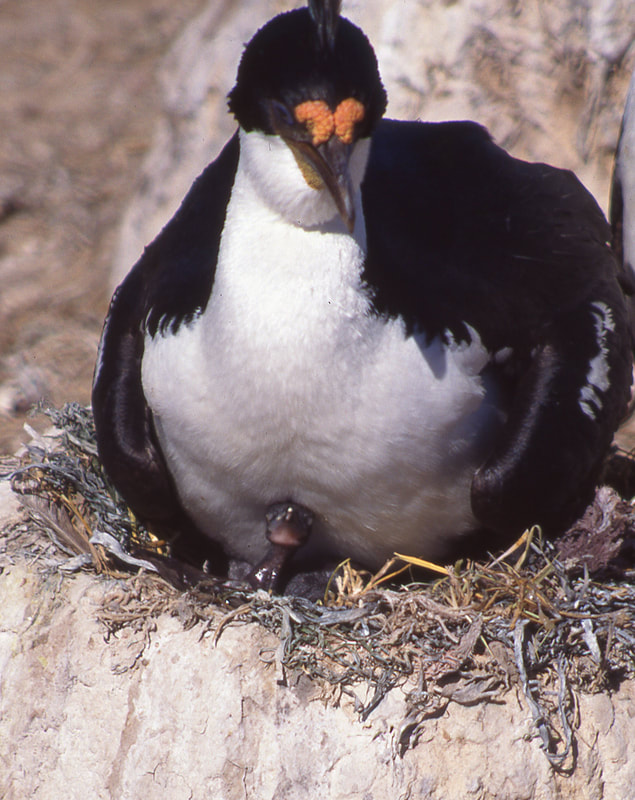 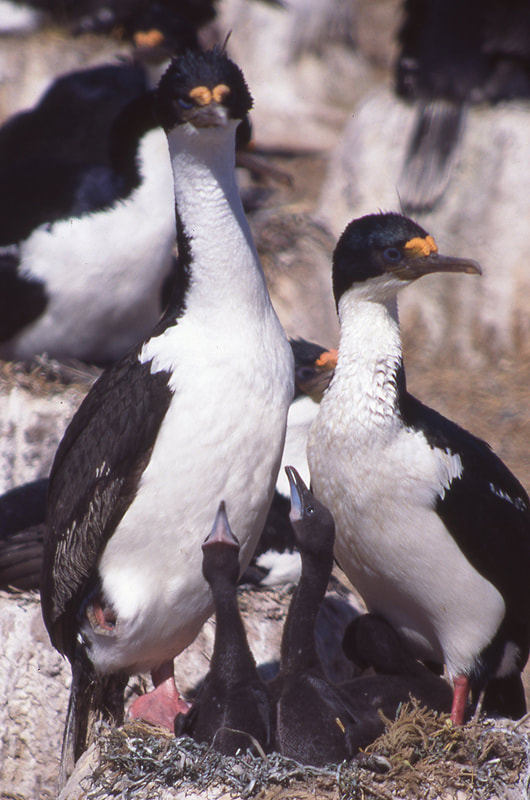 Shown below is the Antarctic tern, found throughout the sub-Antarctic. It is very similar in appearance to the Arctic Tern, which actually migrates from its Arctic breeding grounds all the way to the Antarctic, where it feeds in the Southern summer (November-February), a round-trip distance of over 50,000 miles. This is the longest known migration of any  animal, quite a feat.  How do we know that the bird shown below is not an Arctic Tern?  This one is pretty easy to sort out; it has it’s full black cap, in breeding colors.  That would make it an Antarctic Tern;   Arctic Terns in the Antarctic are not in breeding colors and have a greyish, mottled cap. 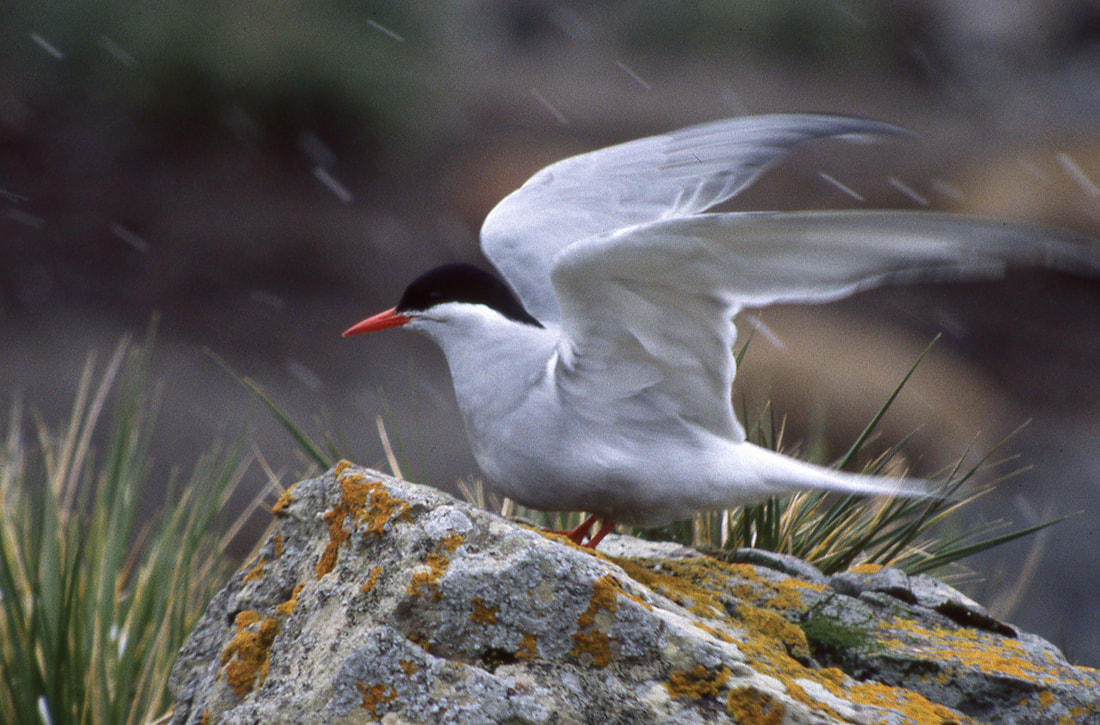 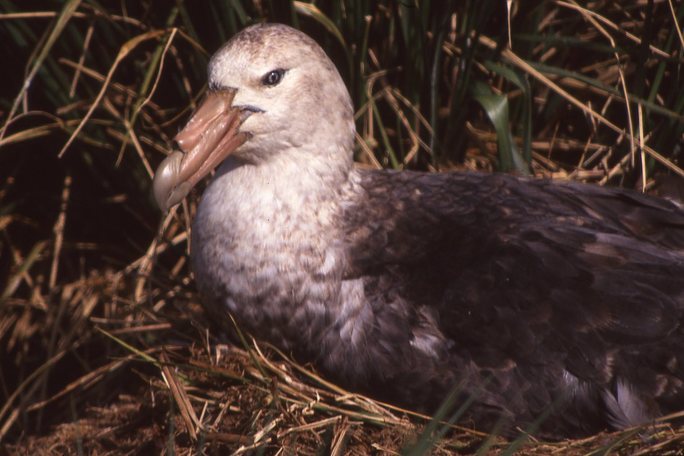 What’s an albatross doing here in this section?  This bird does looks very much like an albatross, although shorter (6-7 ft. wingspan) ,  stockier, and not at all  the same type of dynamic flier/ glider.  But, as you can see,  it’s certainly a tube-nosed bird, so they are related.   It’s actually a Southern Giant Petrel.  Yes there is a Northern Giant Petrel as well, and the ranges of the two overlap. The Southern species has a greenish tip to its bill (above), while the Northern species has a reddish tip.

It’s also a nasty bird, given the name “stinker”. First, the wing display is an aggressive one (to competitors), sort of vulture-like;  it looks absolutely ferocious when it does that.  Speaking of vultures, the Southern Giant Petrel also feeds on carrion (birds and seals), even sticking its head into the carcass of a dead seal or sea lion; you can imagine what it looks like after that  - yes, blood and gore).  It  also preys on penguins.

And there's another little tidbit about its "stinky" behavior . . . 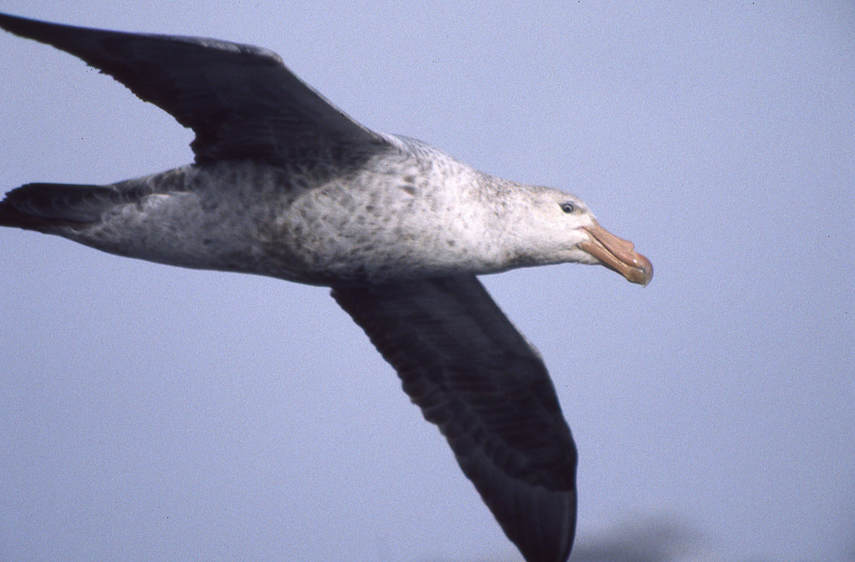 As the case with  most tube-nosed birds, it is a long-distance feeder. Instead of  storing food in its crop for days at a time and then feeding it to the chick, it actually has a little food processor;  it does processes the food into an oily substance in its glandular stomach (called a proventriculus). When it gets back to the next, the single chick is fed a large quantity of "fish and squid oil".  If one gets to close  while it’s nesting (as I may have done below, but got away with), it can choose to projectile vomit that oil at you, and your clothes will be toast. Now that’s a “stinker.” By the way, that last behavior  did not obviously evolve as a result of tourist intrusion, but instead to thwart predators (maybe one of their own kind -  by fouling the flight feathers of the intruder and at the same time lightening their own load. 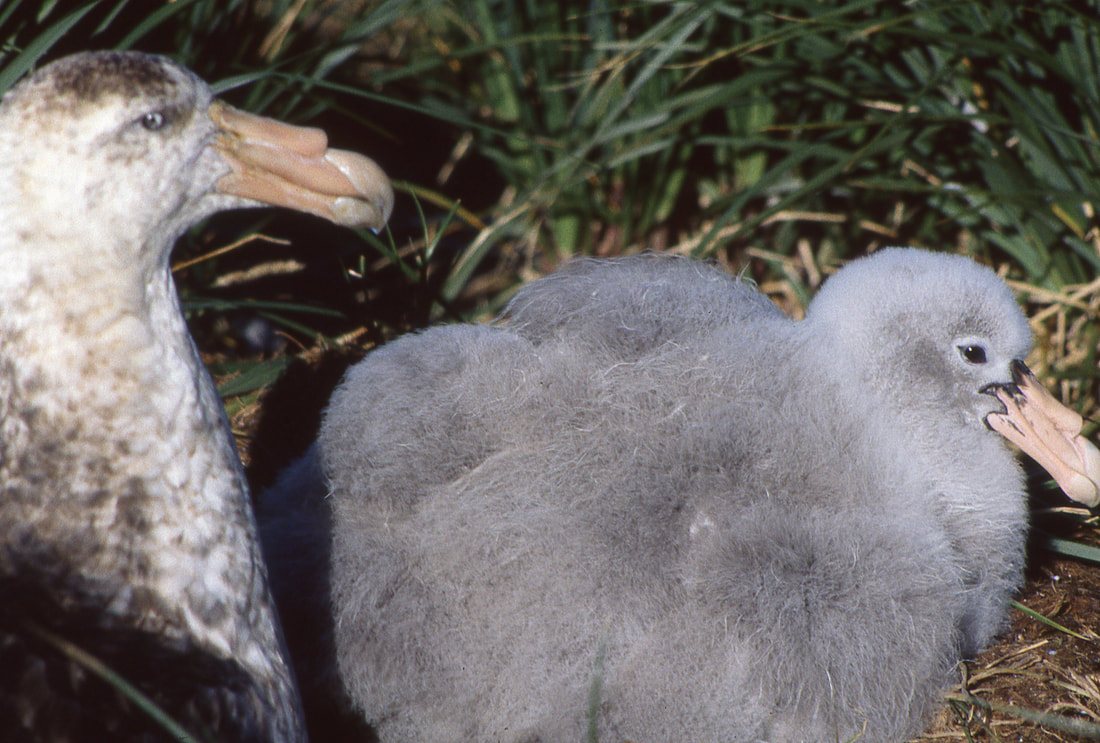 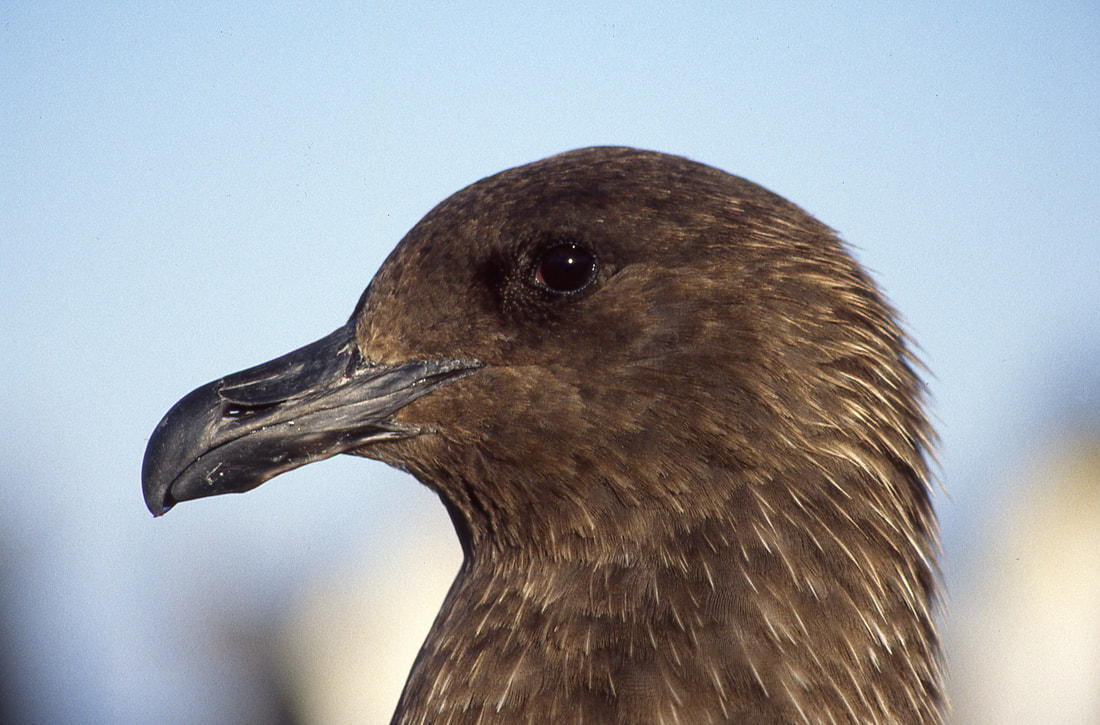 Looking very much like a large gull, the Brown Skua is more of a pelagic (open-ocean) seabird than  (for the most part) the coastal gulls. They are mostly-brown seabirds with a (predatory) hooked bill, and some have a white wing patch (not shown here).  The Brown Skua is another of those conflicted species that hybridize (with the South Polar Skua and the Falkland Skua). It is also known as the Antarctic Skua, Sub-Antarctic Skua, and Southern Great Skua.  To confuse things further, in the U.S., we refer to these birds as jaegars; for example, we have the northern hemisphere Pomarine Jaegar and Parasitic Jaegar.

Skuas/ jaegars are very much opportunistic feeders; they aggressively prey on chicks and eggs of other species and also feed on seal/ sea lion carcassas and placenta. They actively  steal food in flight from other birds (making them disgorge their catch); this is known as a process called  “kleptoparasitic behavior”.  It’s actually quite a learned skill;  they can actually tell which bird is carrying food by their flying pattern and behavior. 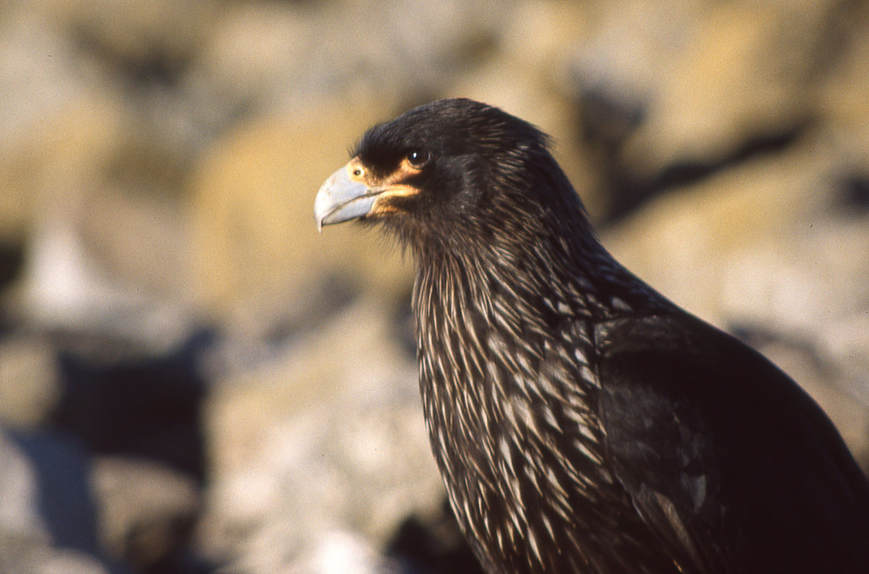 ​A true bird of prey, the Striated Caracara is a member of the Falcon family; it is the most southerly of the raptors, found throughout the sub-Antarctic with a large population in the Falkland Islands. As it is a scavenger (its diet includes young lambs) and carrion eater, farmers treated it as a “varmint,” significantly reducing the population, which is now stable. It’s probably these farmers who gave the bird its nickname of “Johnny Rook.” As meat tends to be red, we advised our passengers not to wear a red cap ashore, as it had a reasonable chance of being "picked" by the Johnny Rook.  We emphasized that we, the staff, would not try to get their "favorite ball cap" back.

The Striated Caracara is a large brownish bird with white streaks, a hooked grey bill, and orange-yellow fleshy patches called “ceres” around the eye and over the beak. As it also feeds on the eggs and chicks of penguins and albatrosses, it nests nearby these seabirds.  In a way, the Caracara and Brown Skua stabilize the population of the nearby seabirds by concentrating their efforts on what they perceive as “inexperienced” or “inept” parents – those that nest on the periphery of the nesting area and are careless in their attention to guarding the chicks/ eggs.  It's a culling process and actually benefits the population in general. This is one of the reasons that, for many birds, so much effort is placed on choosing a good nesting site. It’s more than just  an area that provides some shelter and close access to the ocean. 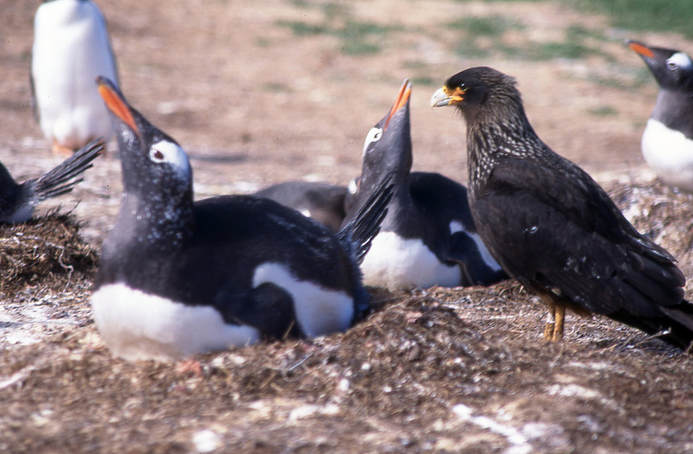 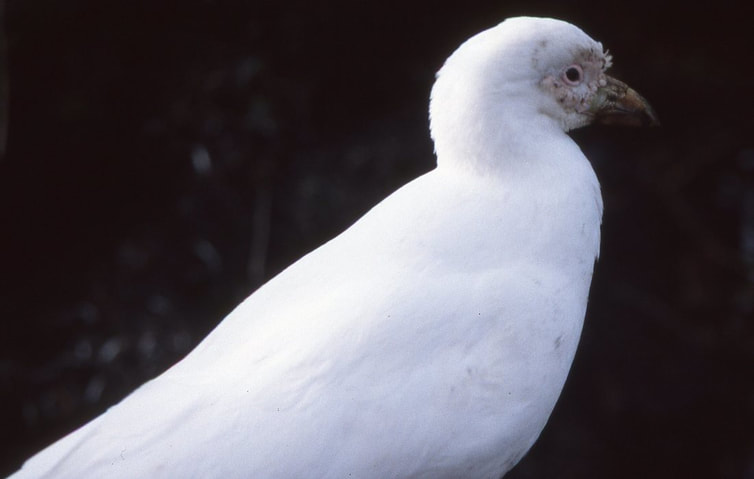 The Snowy (or Greater) Sheathbill is truly an enigma.  What in the world is this land bird doing in Antarctica.  It's actually a wader, related to shorebirds and gulls. This bird is in fact endemic to the Antarctic, the only resident in this area without webbed feet. Related to gulls and shorebirds, the name is derived from the bony casing (sheath) covering the upper bill; it also has a few fleshy wattles in this area.  At first glance, the white, down-covered plumage is somewhat attractive. But nothing else about this bird is.  As some of the birds described above, the Snowy Sheathbill is a scavenger, a carrion eater, and a kleptoparasite. It can be seen covered in blood and gore, as well as feces, which is also on its diet. It does not seem to place a value on “keeping up appearances”, even though it often flies out and perches on ships, presenting its messy self.

The Snowy Sheathbill is 15-16 inches long and  does its best to deal with the cold, hopping about on one foot to prevent heat loss. Although it doesn’t fly any more than necessary, it will move north in the winter to escape the worst of the weather. I kind of think that the sheath may assist in thermoregulation as it covers the nasal air passages. 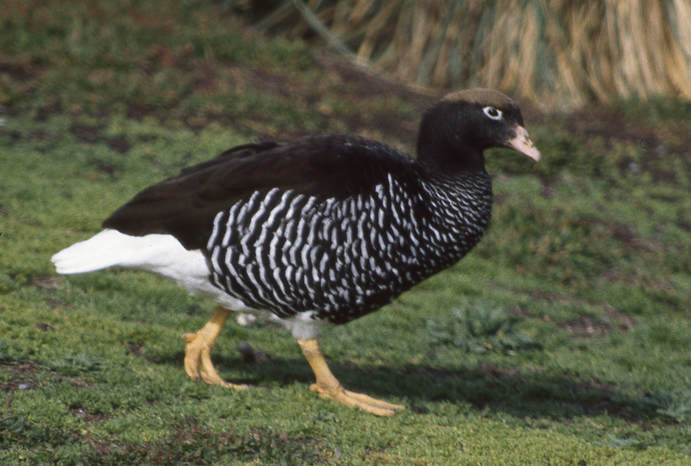 The classification of waterfowl (ducks, geese, and swans) is slightly complicated;  they are all of one Family (Anatidae) and differences between groups (taxa) are partially based on size. Then there are the somewhat larger species that inhabit  the tropics or South America that are classified in the sub-Family or Tribe (yes, that is a taxonomic group) that are called “shelducks” or “shelgeese”; these birds tend to be long-legged, have small bills, and an upright stance. Such is the Kelp Goose, found in the southern part of South America and a few sub-Antarctic Islands, including the Falklands.   So, the Kelp Goose is not a true Goose nor does it eat kelp. The articles mostly say they eat kelp, and then go on to describe their diet, which largely consists of green algae (in particular, sea lettuce - Ulva)   or red algae (in particular, Porphyra). The problem here is that “kelp” is a generic term for brown algae, which they do not eat; it’s generally not as nutritious.

The male Kelp Goose is the white one, making him prominent as he guards the nest of 2-7 eggs being incubated by the female.  The male also has a black bill and yellow feet.  The female is the darker, brownish bird with horizontal grey lines on the chest.  The guarding job is a full-time one, as the eggs and chicks are definitely on the menu for the Brown Skua (see above). Through it all, the chicks (goslings) are hardy, and definitely precocial, as they follow the parents to the coast, use their toenails to climb over rocks, and imitate the parents in the taking of algae.

The Kelp Goose also feeds as a “dabbling duck” would, by putting their head into the water to get food with their “butts” up in the air; they do not actually dive. 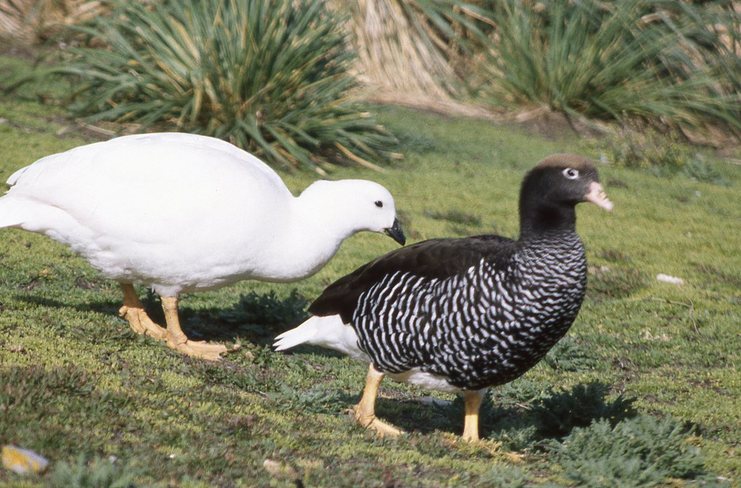