As stated in the Galápagos Section, true seals and sea lions are, according to some, very distant cousins; other scientists believe that they are not related but evolved from different ancestral lines - seals from an otter-like animal (termed mustelids) and sea lions from a beak-like creature with external ears (otariids). This process is called "convergent evolution".  What's the difference between seals and sea lions. Several things, including the external ears on the sea lions. To make it easy, if it walks, it's a sea lion; if it bounces like a "blubber slug," it's a seal. To take it further, there are no sea lions in either polar region (Arctic or Antarctic - north or south of the Arctic or Antarctic Circles - approx. 66 1/2 Deg N or S.  The sea lions found in temperate and some tropical climes can have a long lactation period to feed their young (only 1 offspring in marine mammals - seals, sea lions, whales, etc.) - a year or more. The seals in the polar regions, on the other hand,  must nurse their young quickly (from as little as 3 days to a couple of weeks before weaning) as they are fighting a short season before the "freezer door" slams shut.
​ 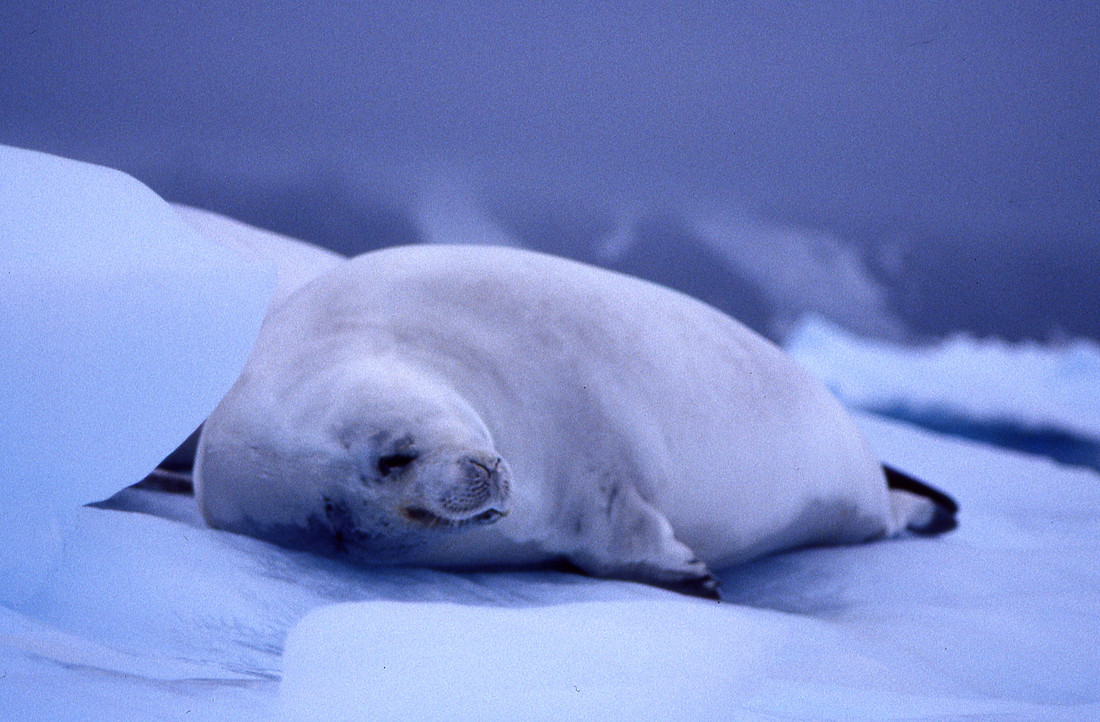 By far the most abundant pinniped in Antarctica, the Crabeater Seal doesn't eat crabs per se,  but it's diet consists largely of Antarctic Krill (a tiny member of the Crustacea subphylum (crabs, shrimps, lobster, etc.).  Krill actually have more biomass than any multicellular species on Earth. In a healthy ecosystem, they feed a wide variety of seabirds (including several penguin species), seals, and whales. For this diet, the Crabeater Seal has a special adaptation - tricuspid teeth (see photo at right below) that strain krill much as a baleen whale does. 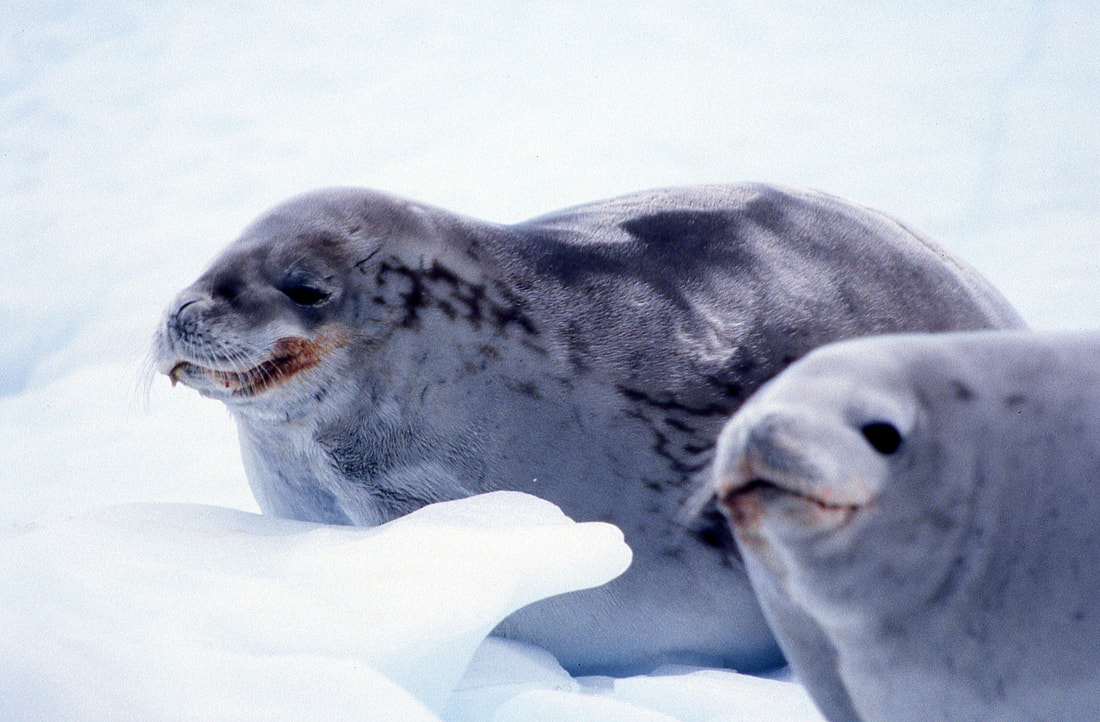 The Weddell Seal is the most southern breeding mammal in the world, and as seen here, it has a mottled coloring. They are deep divers (to 200 ft), staying submerged for more than an hour - feeding on fish, squid, and krill; the photo above shows the stains left from a recent meal of krill.   Their territories are centered around all-important ice holes. Weddell Seals are unusual in that they will always choose to lie on snow or ice, even if rock or warmer ground is available. For protection from predator Orca Whales, they will avoid pack ice (which can be tipped. 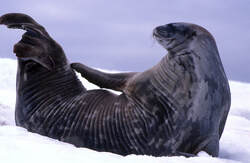 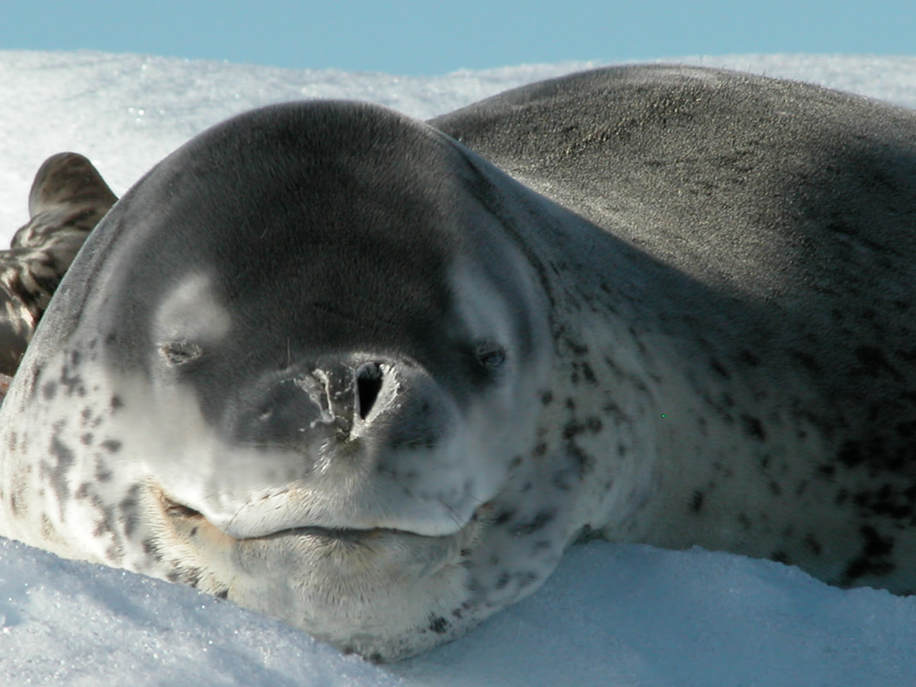 Named for its spotted coat, the Leopard Seal is a true predator, although (as Orcas) it is actually maintaining the vitality of the ecosystem by culling the most vulnerable/ weakest penguins and other seal species it preys on. With a snakelike head and huge mouth (often agape). it looks every part the villain. 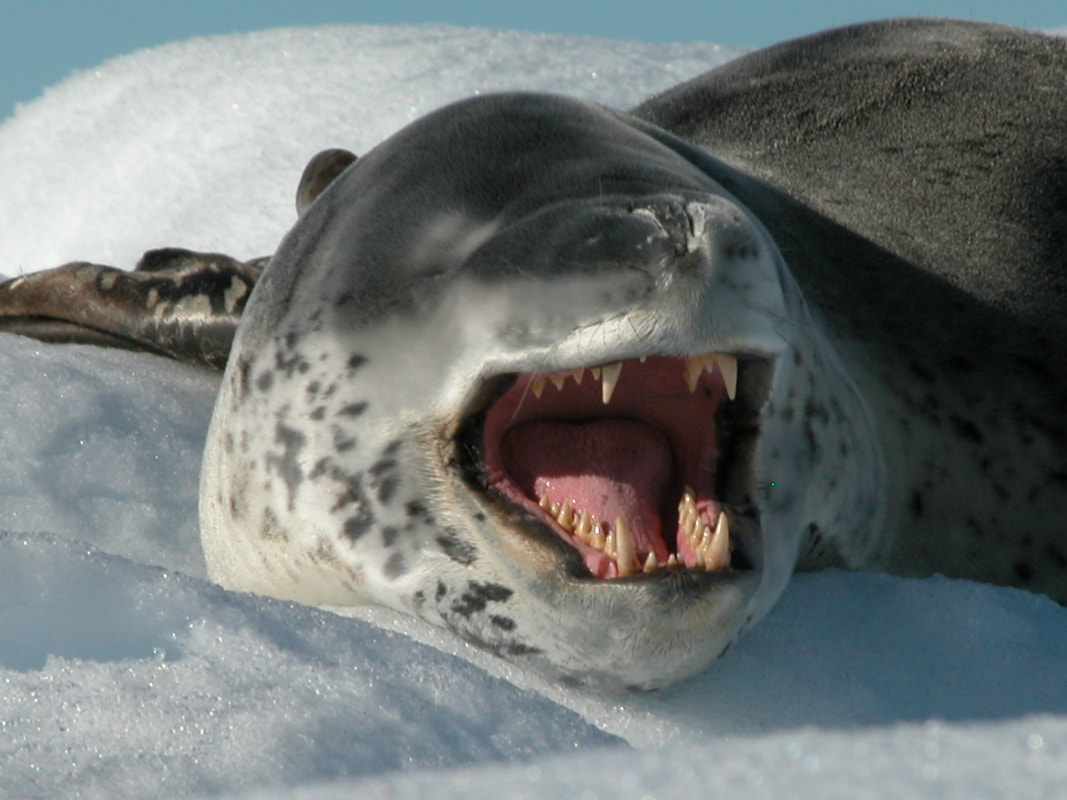 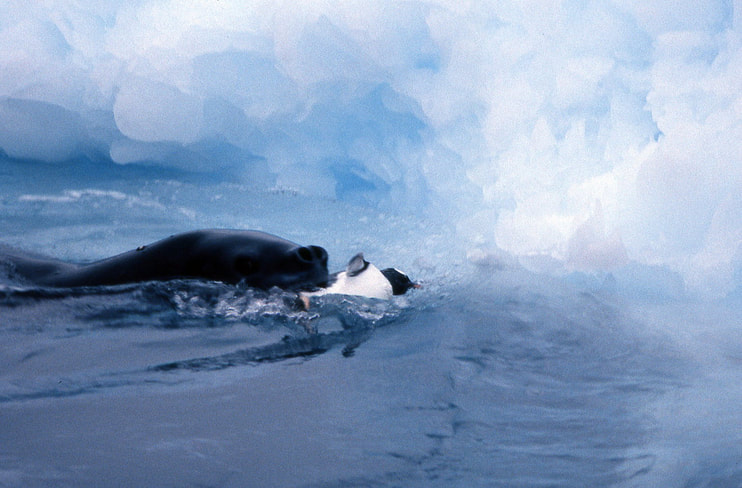 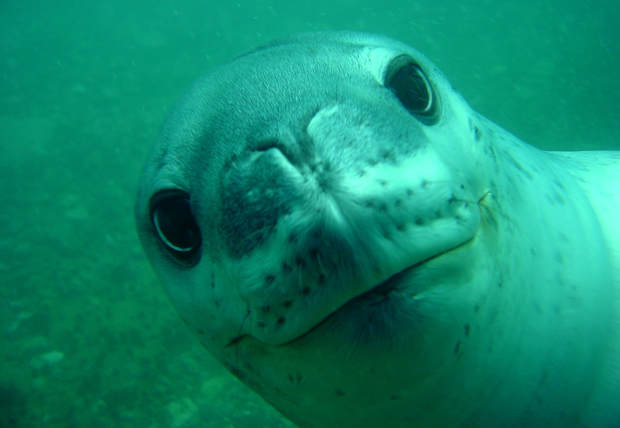 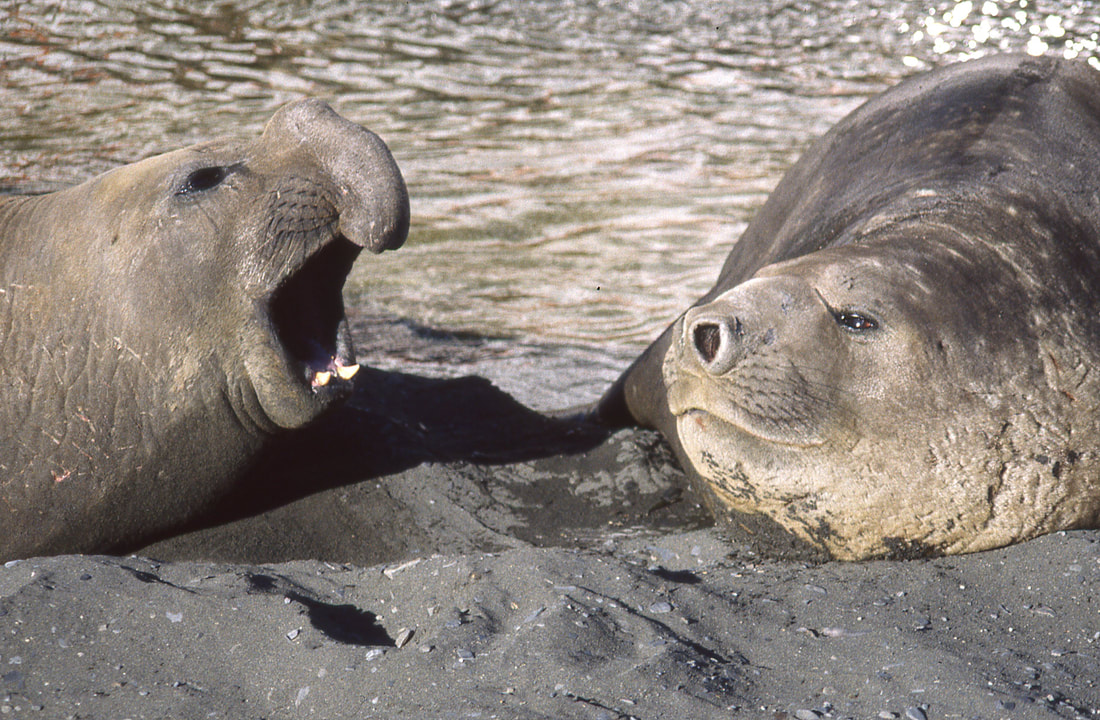 The Elephant Seal is named for its enormous size (the 20 ft. males of the southern species weigh up to 4 tons) and the males' trunk-like nose (called a proboscis) which is a sign of its breeding status.  Both the northern species (found on isolated beaches and islands off the coast of N. California) and southern species (found mainly in the sub-Antarctic islands, such as S. Georgia) were once on the brink of extinction (hunted for their blubber which was rendered into oil - both species are now recovering. They are incredibly deep divers (down to more than a half mile) where they feed on invertebrates, notably squid. During the breeding season, the males joust for access to females; these blood affairs are seen on many documentaries. 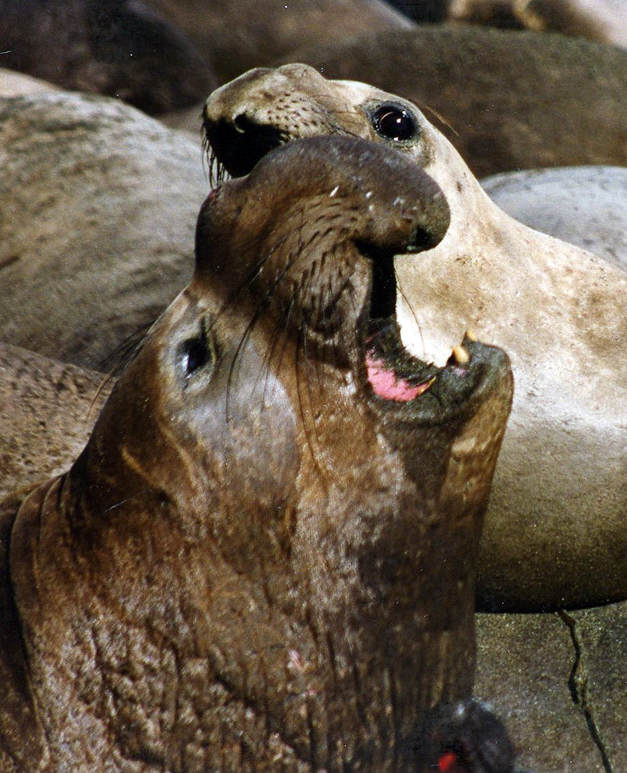 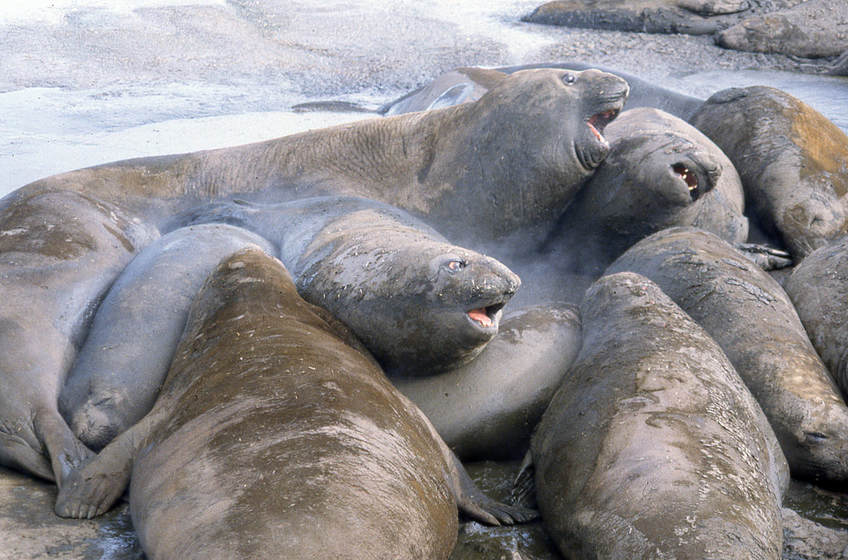 A harem of female Southern Elephant Seals and pups (called "weaners") piling on one another, a behavior known as "thigmotaxis". 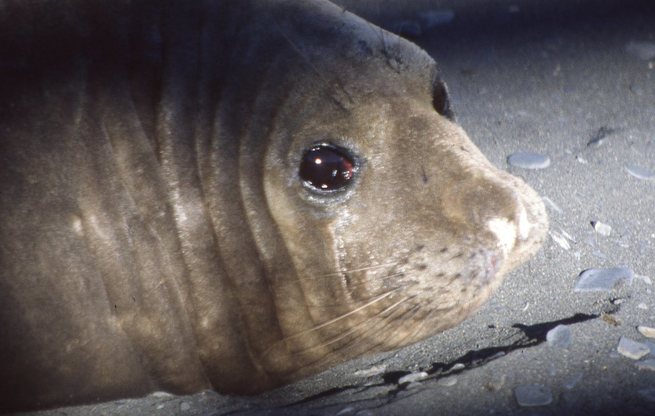 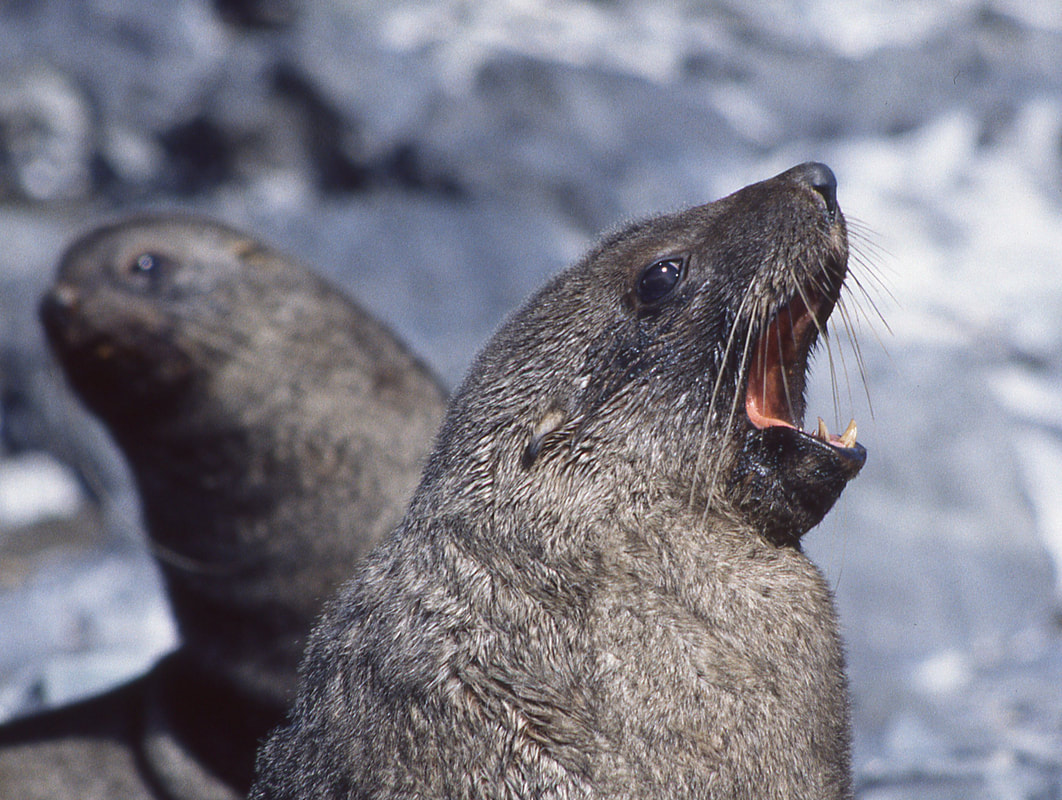 Here's a good look at the Antarctic Fur Seal, which as pointed out above, is actually a sea lion (external ears, fins to support its weight as it walks, etc.). Also, as there are no sea lions  in the polar regions, the Antarctic Fur Seal is found in the sub-Antarctic Islands, with the vast majority (over 4 million) found on S. Georgia Island. Their diet is varied, consisting mainly of krill.  They have a bear-like head, for which their genus is named  - Arctocephalus. 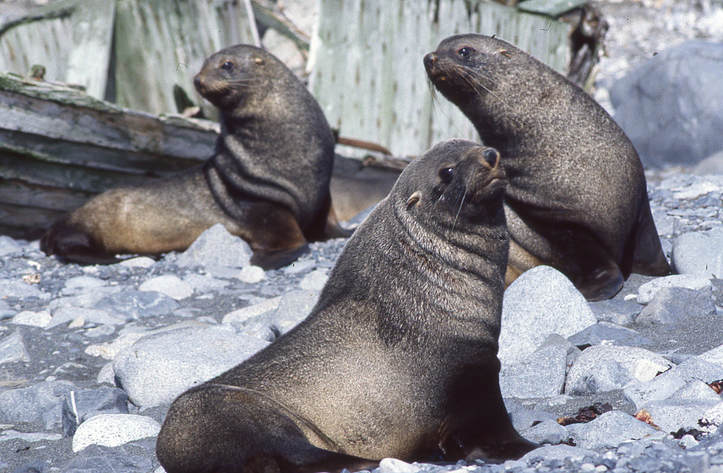 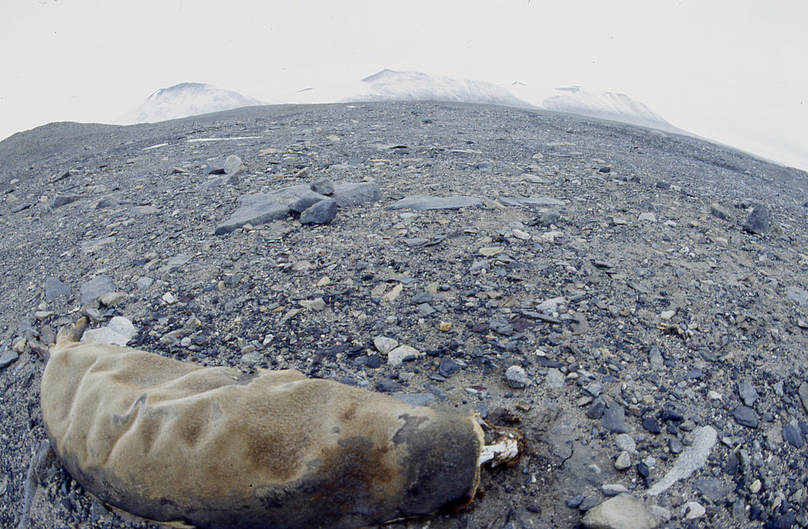 You may well wonder why I am sharing a photo of a dead seal (probably a Crabeater). When I first saw the animal, I thought it had recently died. sure looked that way to me! It was then pointed out that I was staring at a mummified seal that had died over 2000 years ago. We were in a very unique and fascinating extreme environment - one of the Dry Valleys of Antarctica (so named because of their very low humidity and lack of snow or ice cover. Cold katabatic ( gravity-caused) winds traveling down from the surrounding Transantarctic Mountains at over 100 mph blow away all but a minimum of moisture and precipitation; the seal carcass  quickly mummified/ desiccated. Overall, there is a minimum of erosion and decay here - also a bare minimum of plant life. At the same time, complex molecules are found  here that support unusual extremophile bacteria called "chemoautotrophs" - capable of surviving without any sunlight or organic molecules. This is one of the lifeforms we are looking for on Mars and other extraterrestrial locations. No wonder scientists are actively conducting exobiology studies here.  Neat stuff! 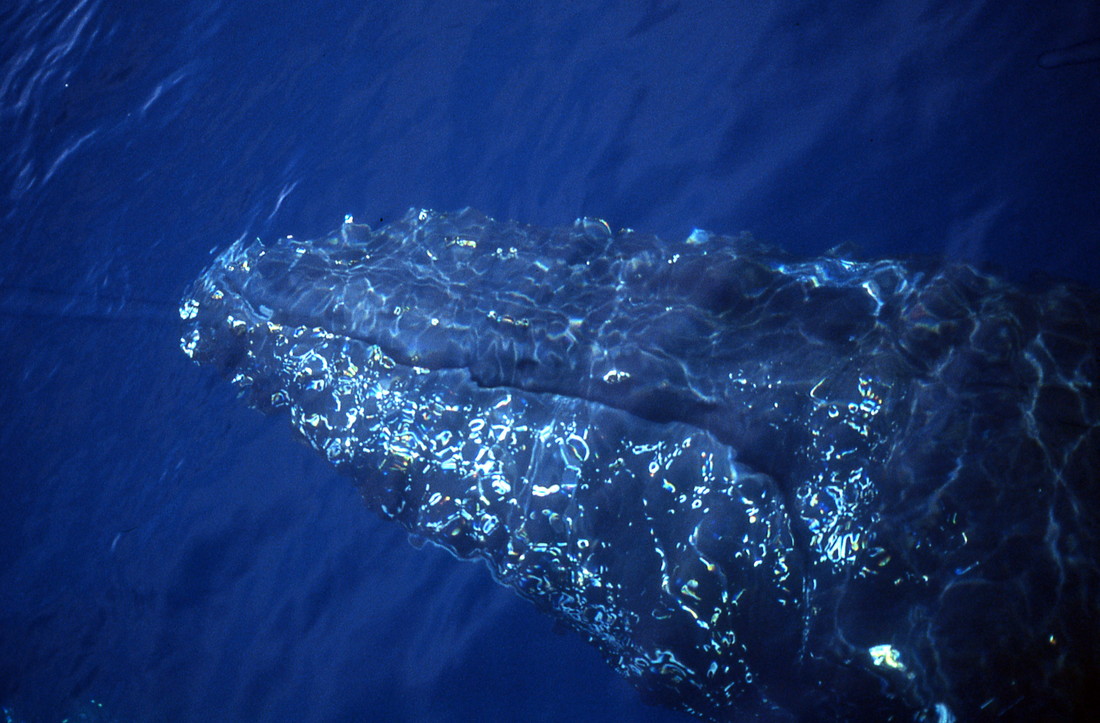 The colder the water, the more oxygen it can hold and therefore the more life it can maintain. Hence, the nutrient-rich waters of Antarctica is teeming with life – abundant food for eight commonly seen species of whales, including the humpback, shown in these photos.  Humpbacks are probably the most popular/ best-known of the baleen whales due to their graceful, dramatic and oftentimes repetitious breeches, cooperative group feeding behaviors, beautiful, long & complex songs emanating from males during the breeding season, and raised-tails during their deep plunges into the depths. It is their raising and bending of their backs prior to diving that accentuate the hump in front of their dorsal fin and give them the name “humpback” . They average about 40 ft. in length, with extremely large pectoral fins nearly a third of this length; these fins are used for maneuvering, communication, thermal regulation, and directing food into their gaping maws (see below). 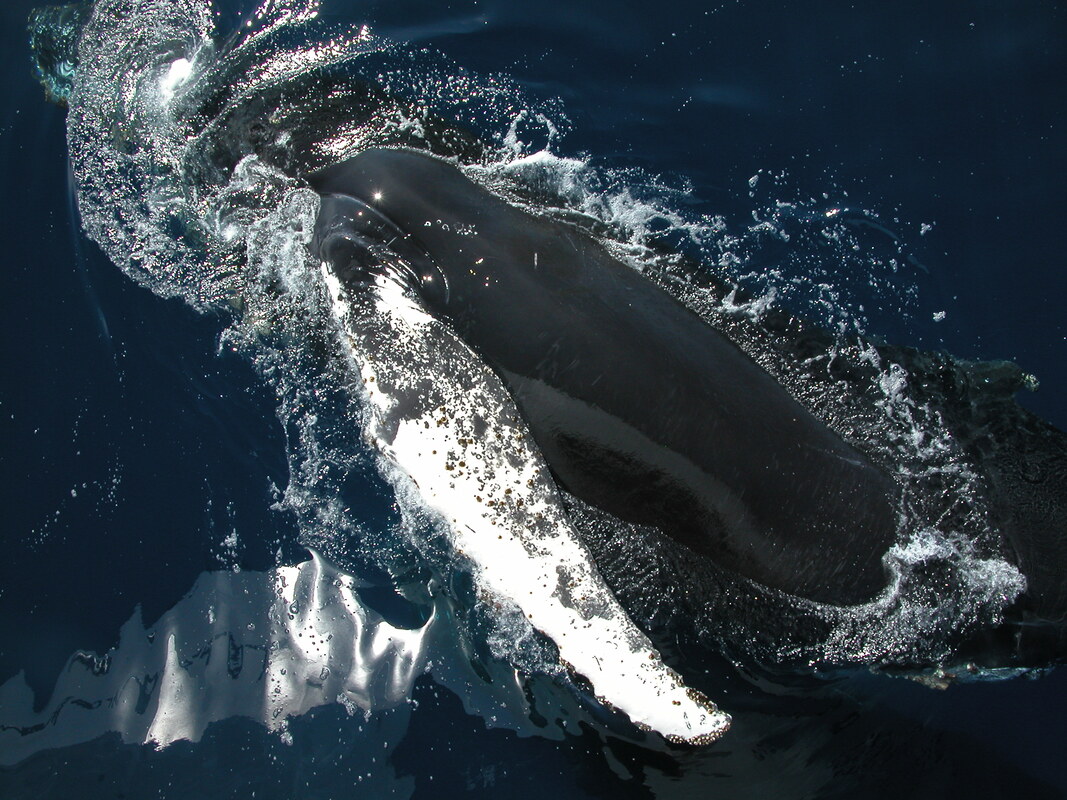 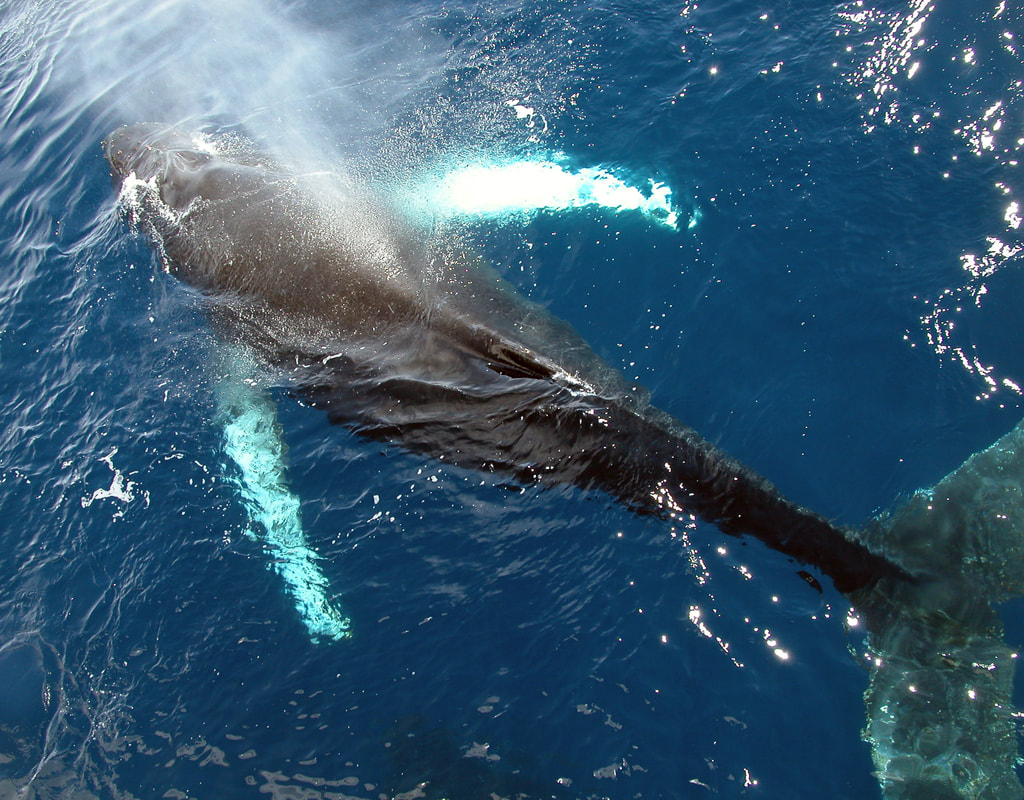 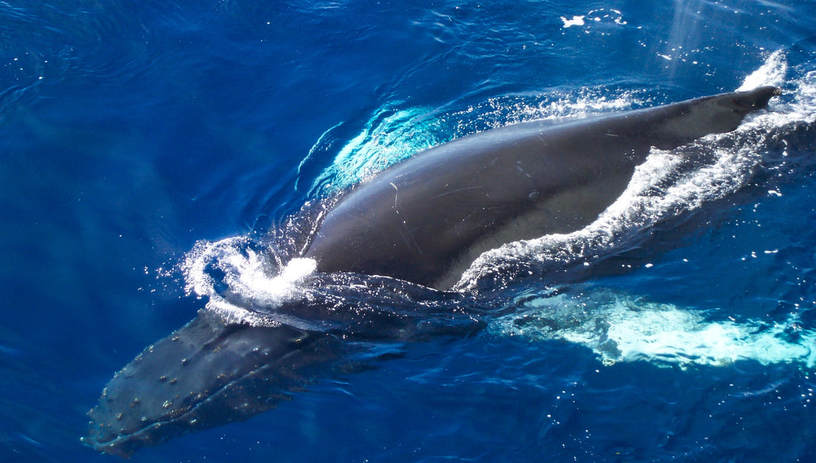 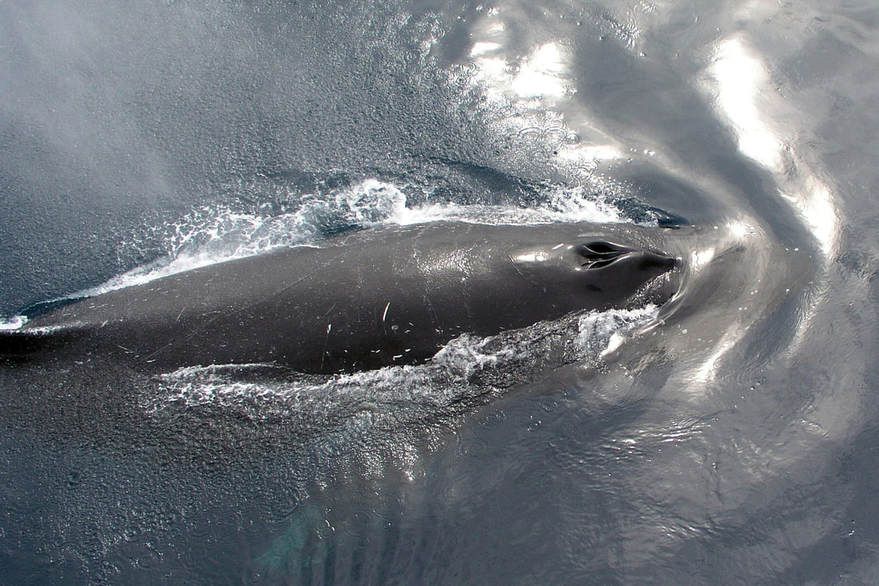 The characteristic double blow hole of  baleen whales - evolved from the nasal openings of land mammals over 50 million years ago. 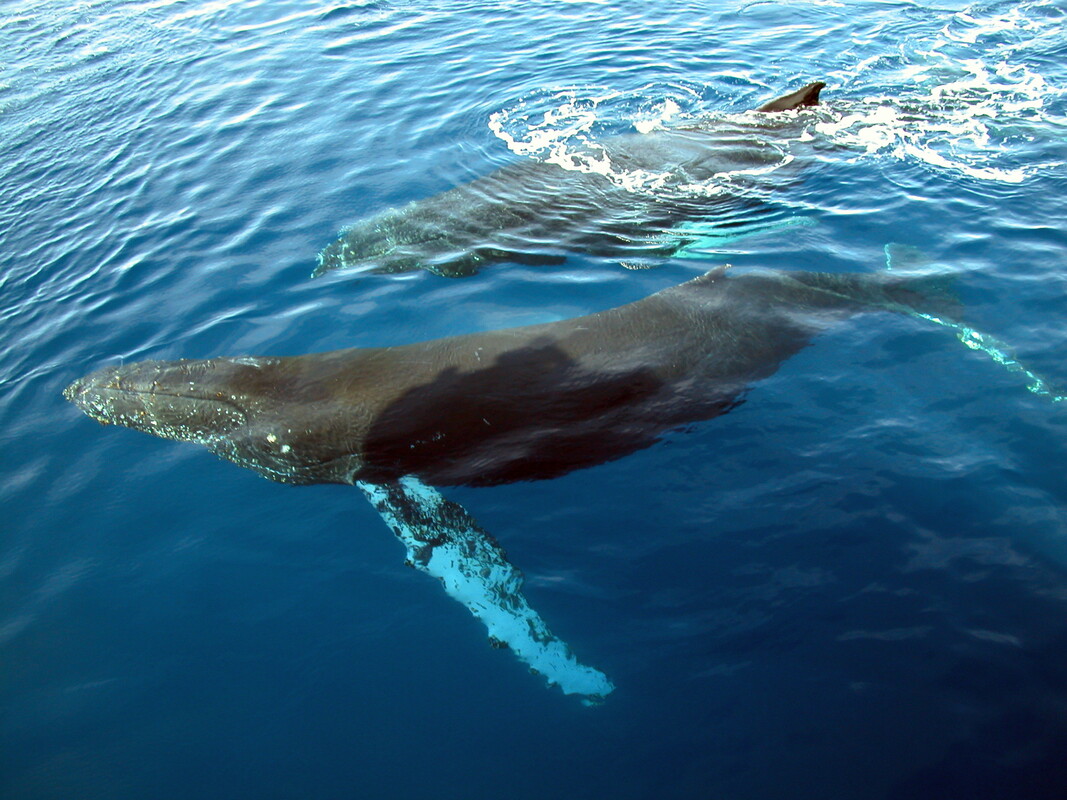 Good look at a cow-calf pair. 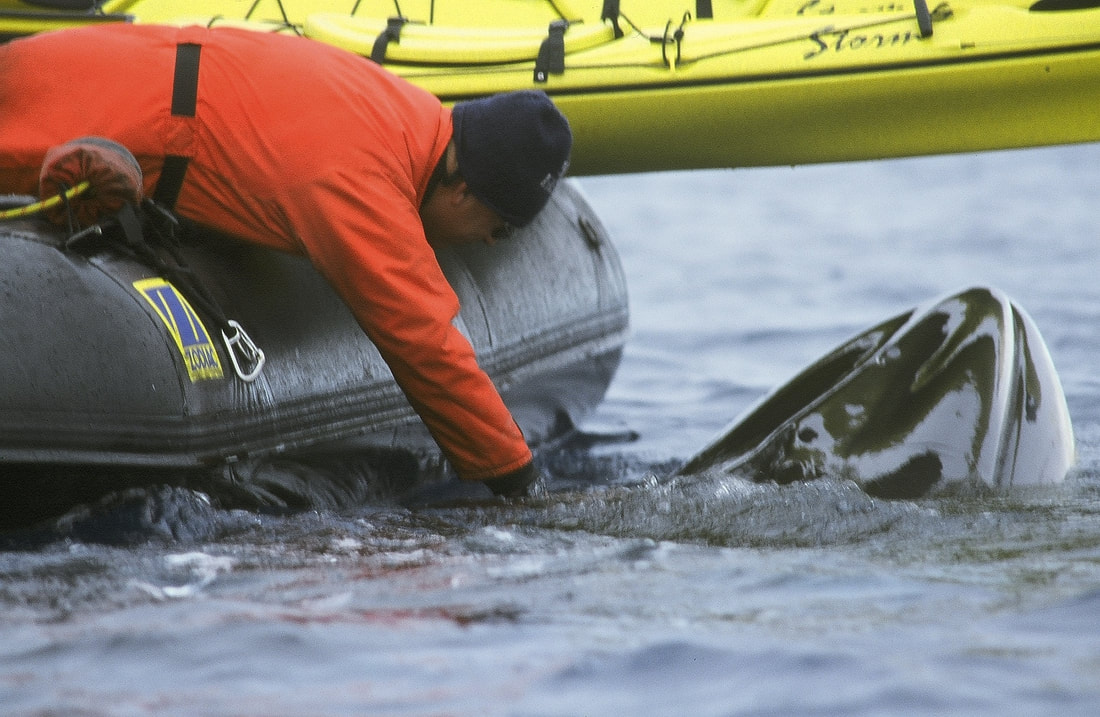