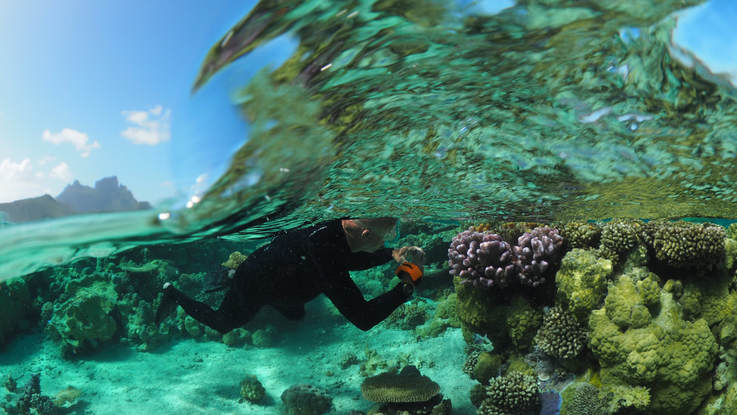 As much as I enjoy diving, I've longed to spend more than an a few minutes in a given area, allowing me the time to patiently screen the nooks and crannies of the coral formations, looking for the little stuff and enjoy macrophotography. In 2017, I travelled to French Polynesia to the islands of Bora Bora, Huahine, and Morrea.   It was truly an incredible experience.  I had in hand an Olympus Tough TG-5®  that looks like your average "point and shoot."  But it has a dedicated underwater macro mode as well as a "microscope mode."  Without a dedicated underwater housing, it's rated to about 20--30 ft.  It did an incredible job, although you have to be careful about backscatter, even with fill-flash, especially at distances greater than a few feet.  And, as cameras go, it's relatively inexpensive, in the $400-$500 range.

The challenge with coral reef snorkeling photography is to find reefs shallow enough (less than 10  ft);  French Polynesia certainly provided that opportunity.  An equal challenge is to find healthy reefs, as climate change, invasive species (such as the Crown of Thorns seastar), and agricultural runoff have combined to drastically affect almost all the world's coral reef communities in recent years.  Such was the case in French Polynesia as well, but there are a handful of Tour Operators that  will take you to the few good reefs if they sense that you're not going to step on and touch everything.

​I'm going to start with the giant clams as they were so visually impressive with their brilliant color patterns;  indeed, no two giant clams are alike in their color scheme.   They have specialized cells called irIdophores that produce a shimmering color pattern;  if you take enough photos,  some shots will capture the brilliance more than others.  Living for up to 100 years, the giant clam is found in the coral reef communities of the Pacific and Indian Oceans.

Finally, in the photo above, there really isn't a big wave about to sweep me over the coral;  it was something that my photographer friend and guide, Quentin, achieved in his post-processing. 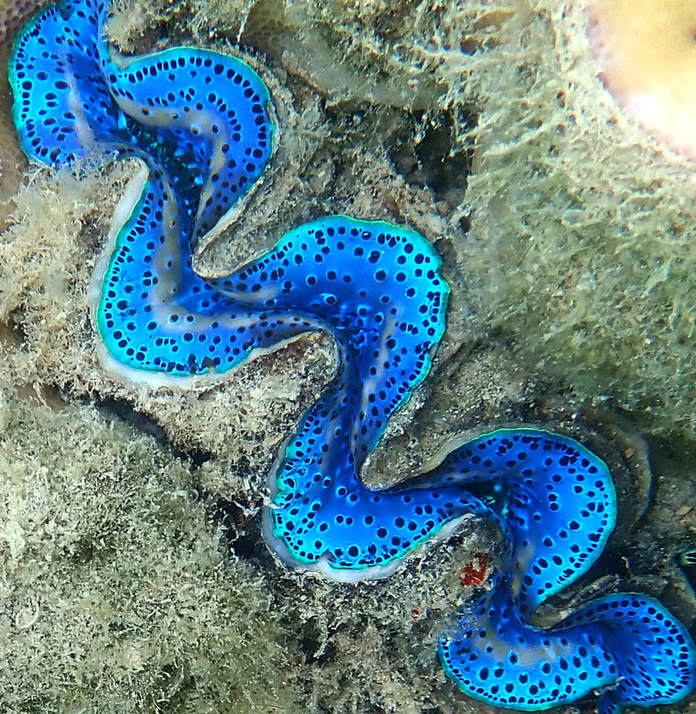 Coral reefs provide food and habitat to countless fish species,  many as colorful as the reefs themselves.  Many of these fish are small creatures - damselfish and their kin. Sometimes you have to patiently look in to a crevice to find on of these little guys, it was wonderful to have the time to do so.  Most snorkeling sessions were 3-4 hours, not possible when Scuba diving. 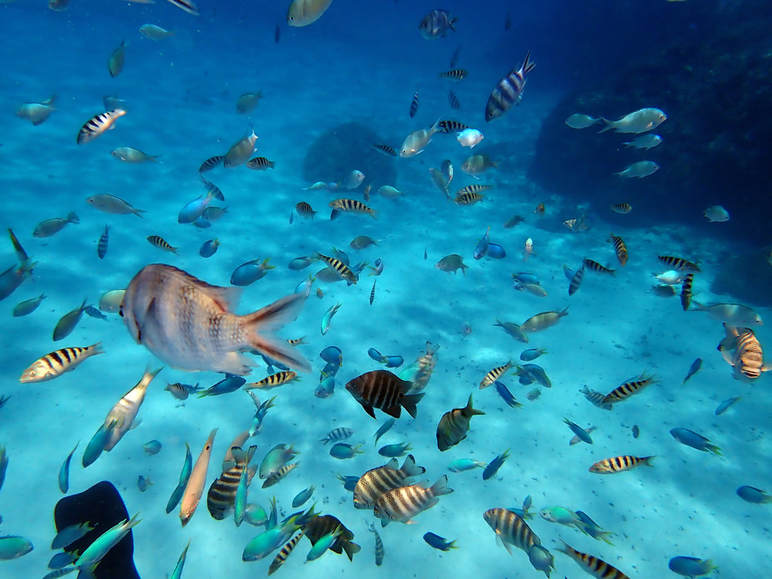 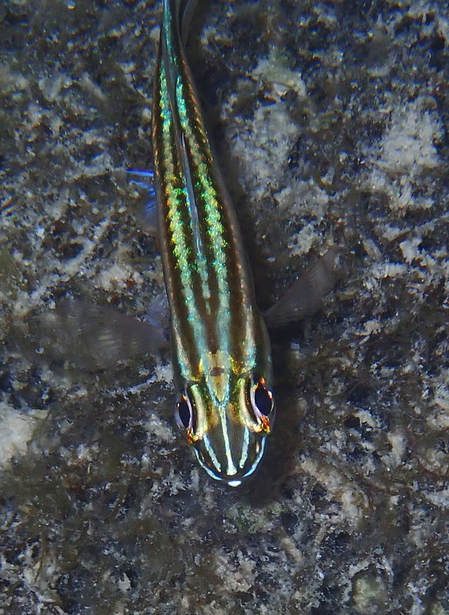 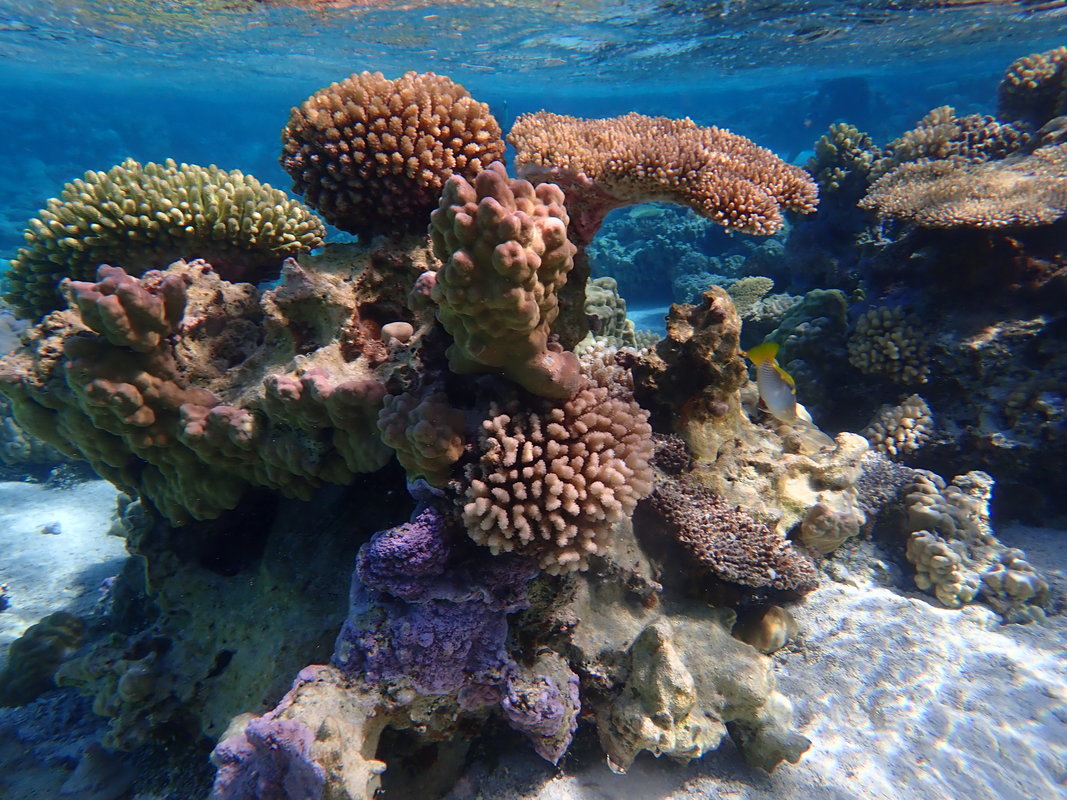 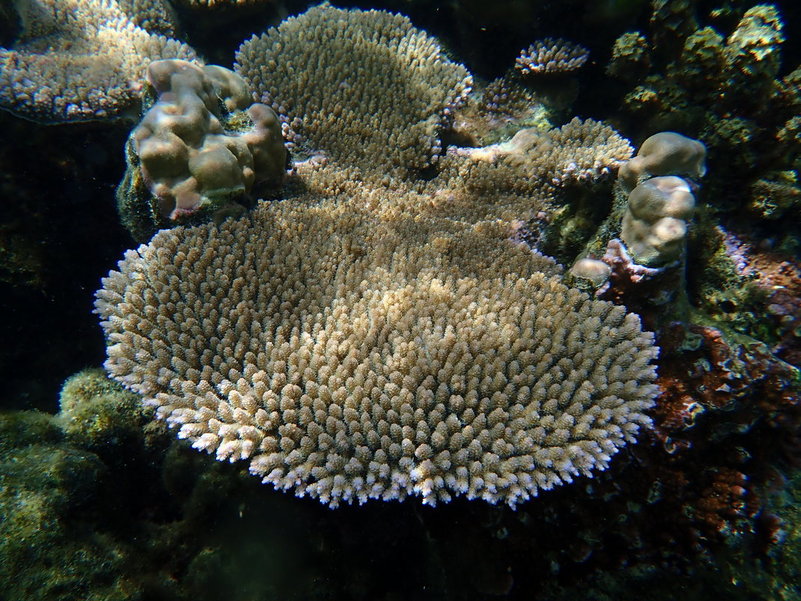 Want to see a close-up of this table coral?  See the image on the left below.
​Want to get even closer?  See the image on the right.
Some of the prettiest and smallest inhabitants of a coral reef are little Christmas trees.  They are actually tube worms that have two  brightly colored crowns that circle outward from a central spine and are appropriate called Christmas Tree Tube Worms.  Just over an inch in length, the feathery appendages are used to capture bits of plant plankton that happen to be floating by;  these crowns are structurally part of the  animal's "mouth" and are also part of the respiratory system.  They are an ideal subject for a macrophotographer, although if you are not still in the water or get too close too quickly, they can pull the entire apparatus in and close the door (called an operculum) until at least their part of the coast is clear. 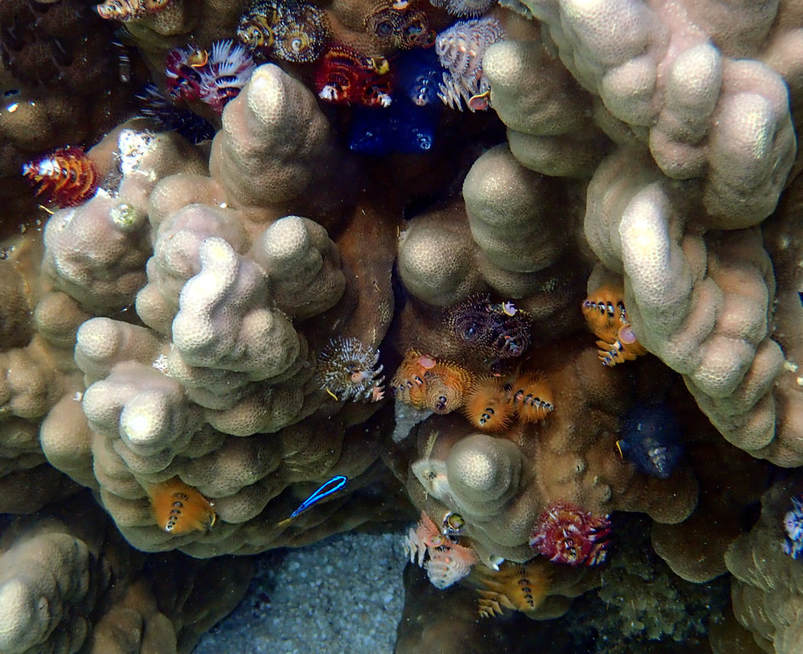 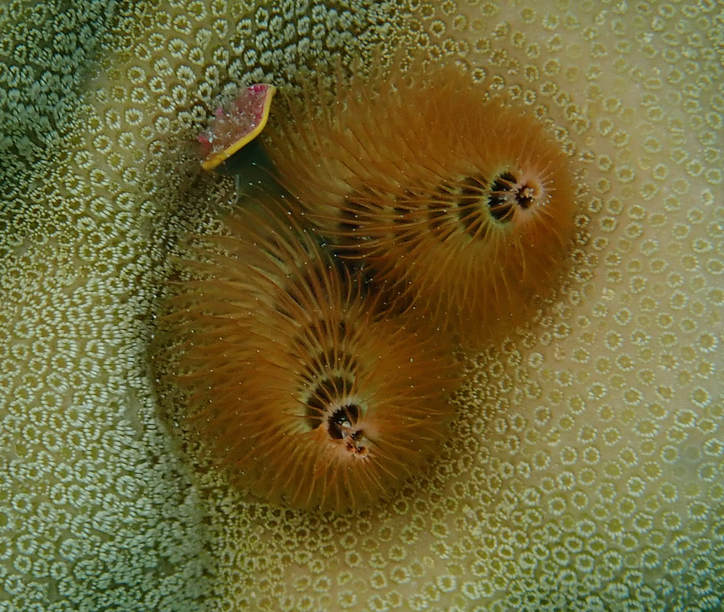 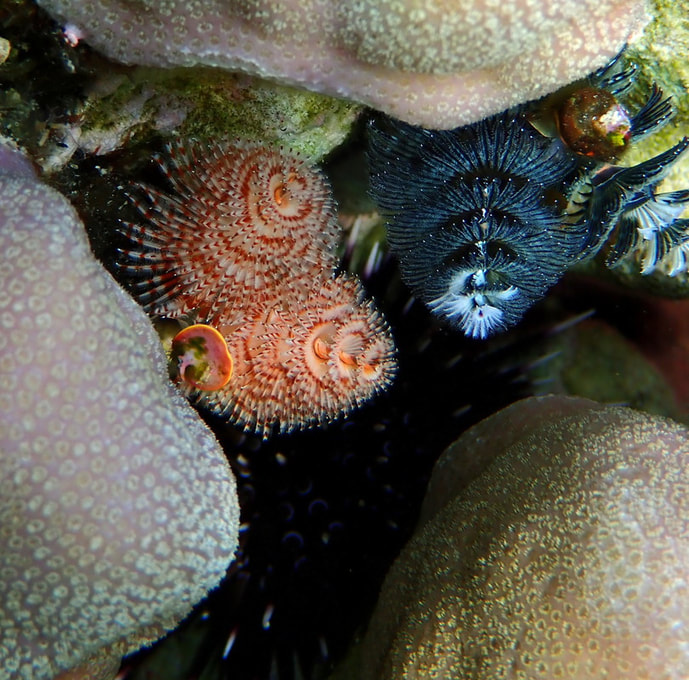 Back to our fish friends in the coral reef community.  Here. the wrasse family is well represented, with several hundred species of bright, colorful fish.  Aside from the complex color patterns which change as they develop, their biology is also quite complex.  As with the parrotfish,  large female wrasses will often change sex  as they mature,  becoming what is sometimes termed a "(supermale)." 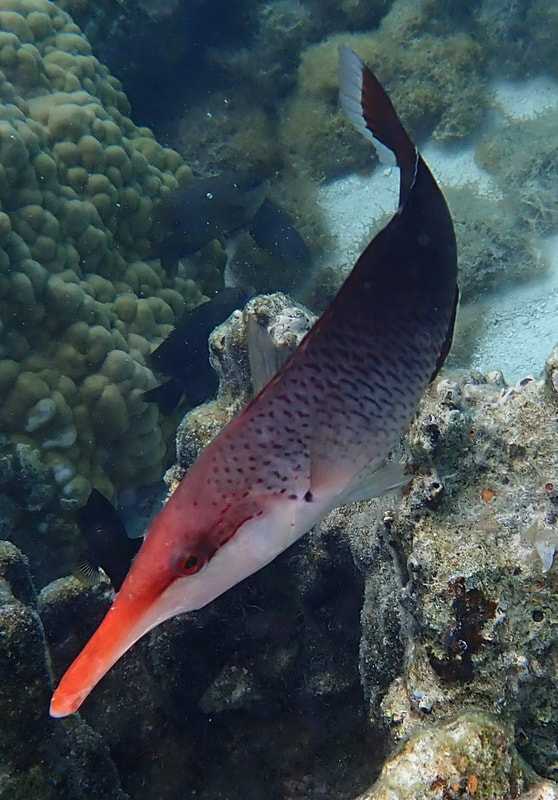 A Pacific Bird Wrasses is shown above and a Floral Wrasse below. 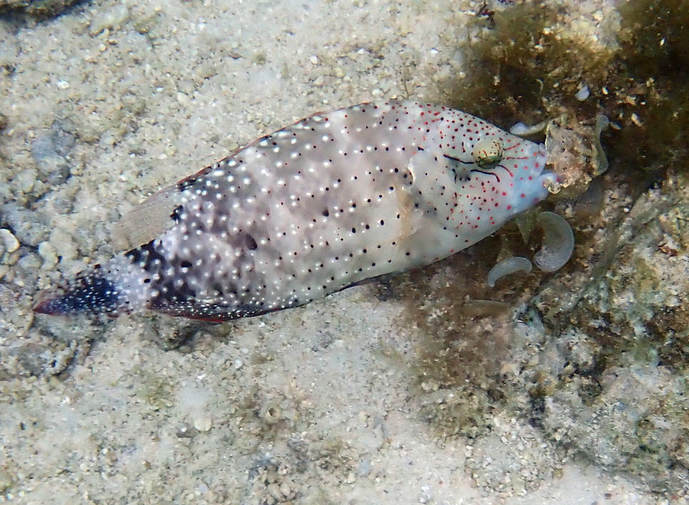 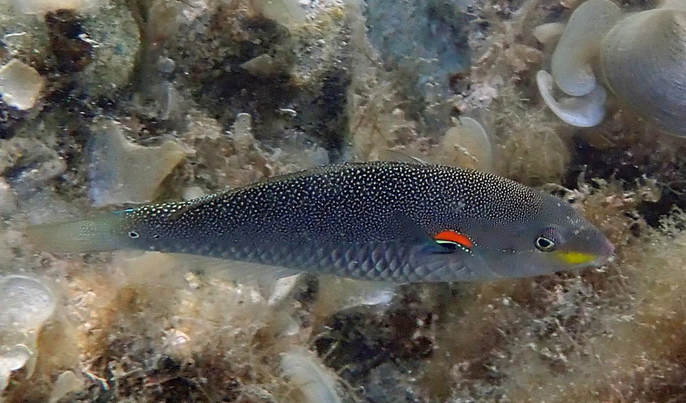 Photo above is a beautiful Red-Shoulder Wrasse, and below we have a Six Bar Wrasse (L) and a Clown Coris Wrasse (R). 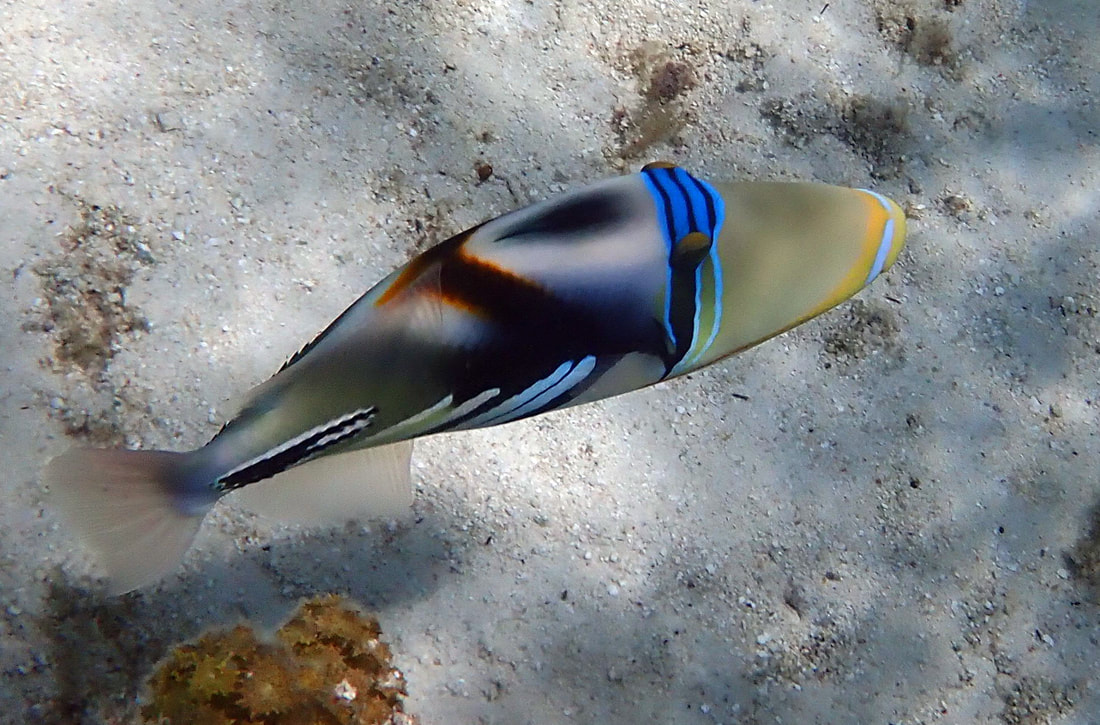 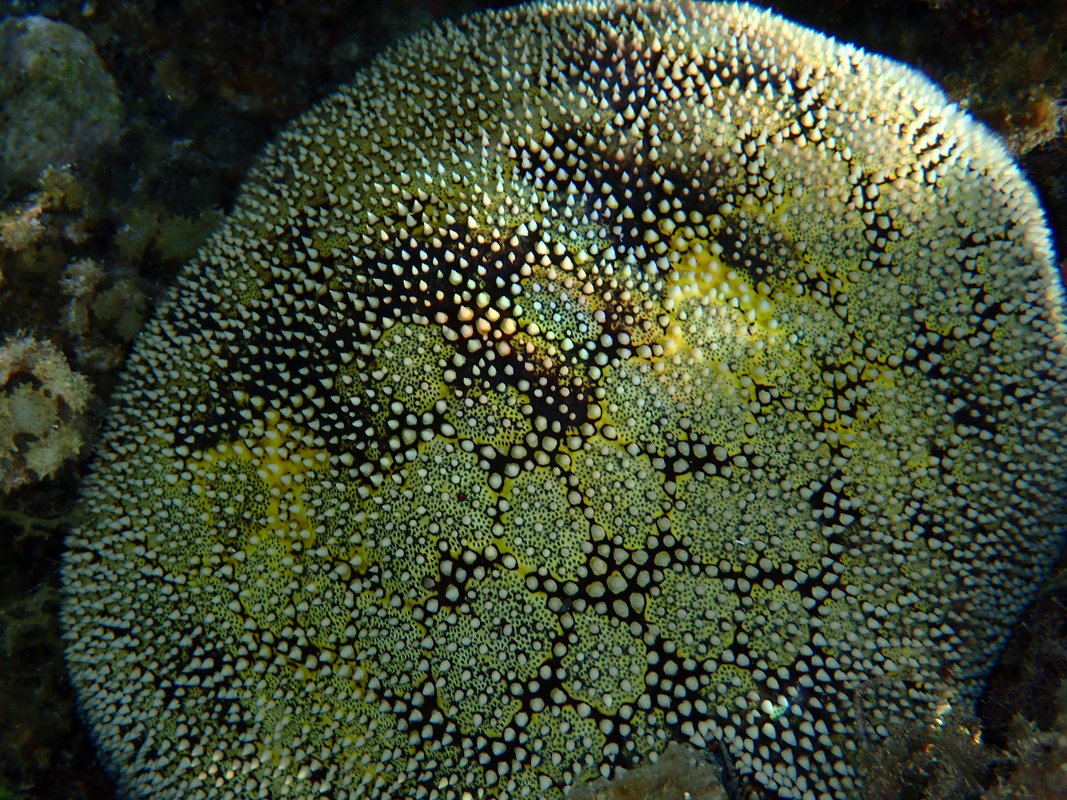 While traditionally-shaped sea stars were not present, their first cousins, the cushion stars  were abundant (above).  A more distant relative in the same Echinoderm Phylum, the sea cucumber were also found on the sea floor (as the Leopard Sea Cucumber below. 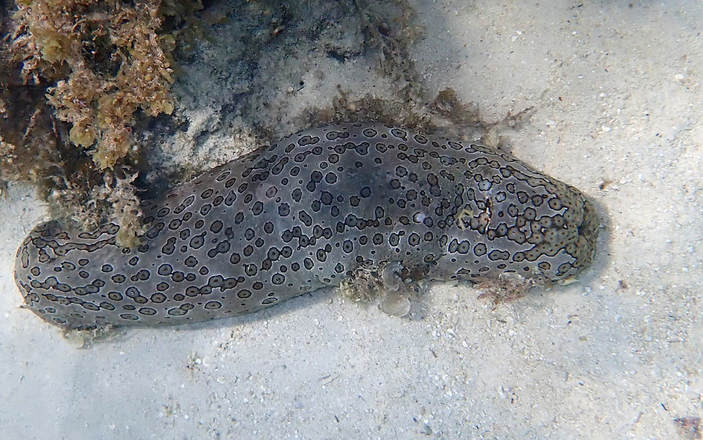 Here and there on the sea floor one can find Mushroom (Fungii) Coral and even Golf Ball Coral.  Thank goodness for Common Names, and double thank goodness for the Scientific (Latin) names used for proper classification.

Found throughout the world's oceans, the Trumpetfish is nonetheless always special to view.  Not quite as well known is the Salander's Toby (below) , a proud member of the Pufferfish clan. 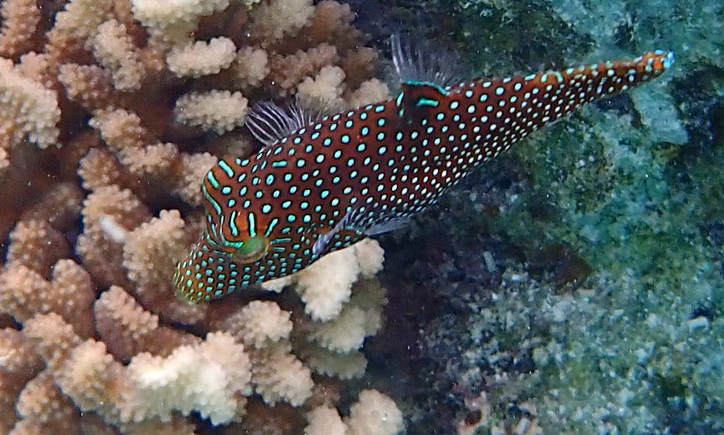 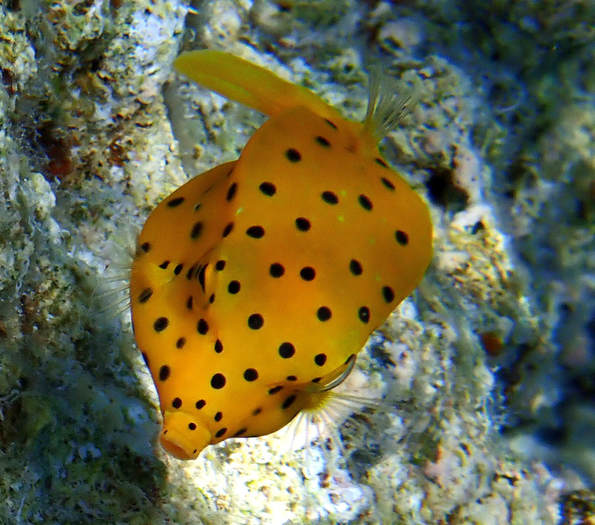 Other proud puffers are the Yellow Boxfish (juvenile) seen above
​ and the White-Spotted Pufferfish below. 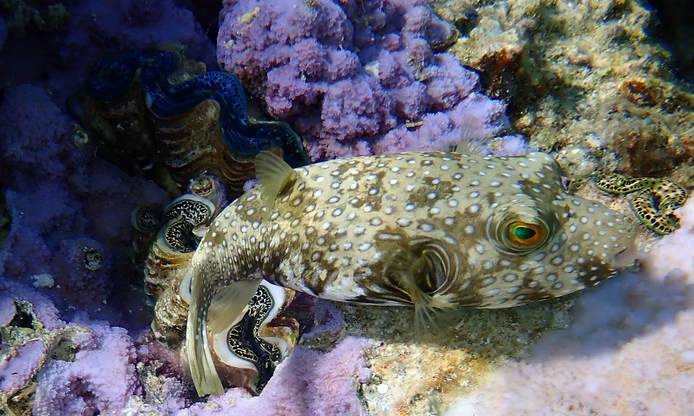 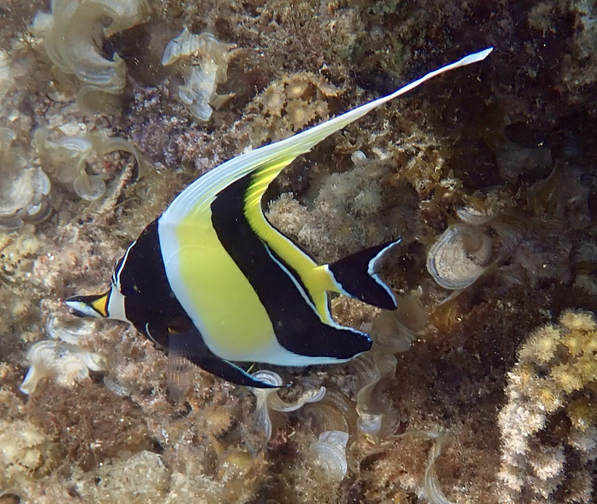 The graceful beauty known as the Moorish Idol is  pantropical
​as is the Convict Tang, seen schooling below. 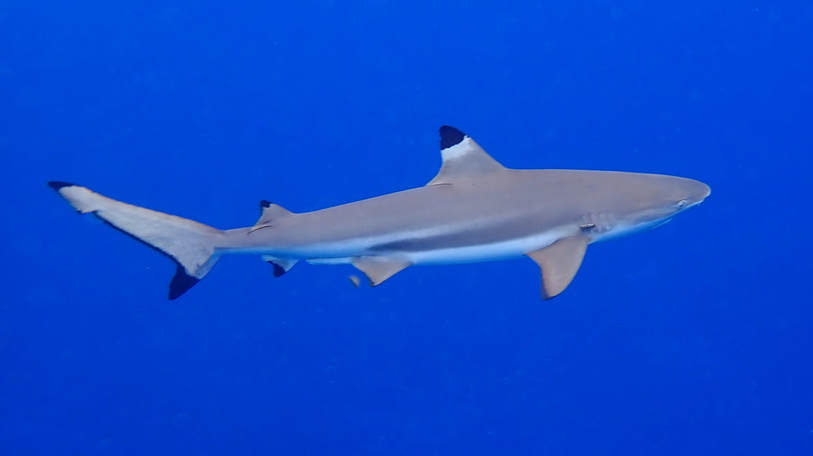 No tour is complete without sharks and morays.  Here we have the
​Black-Tip Reefshark and the menacing (sort of) Giant Moray. 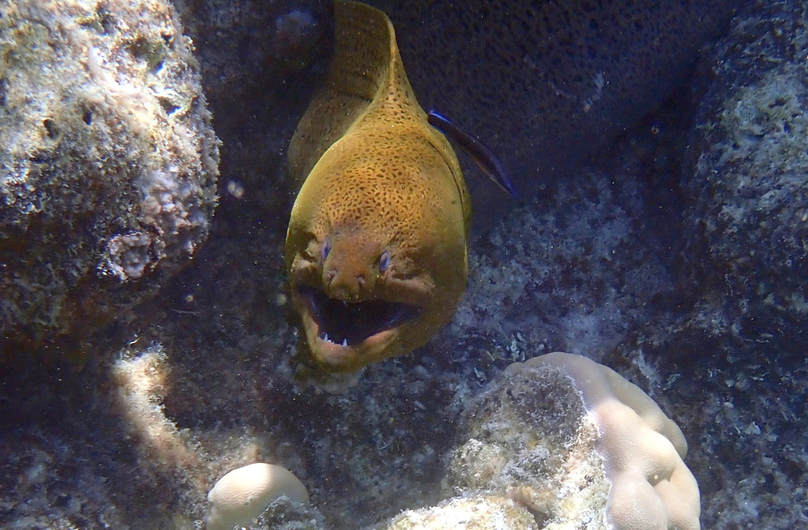 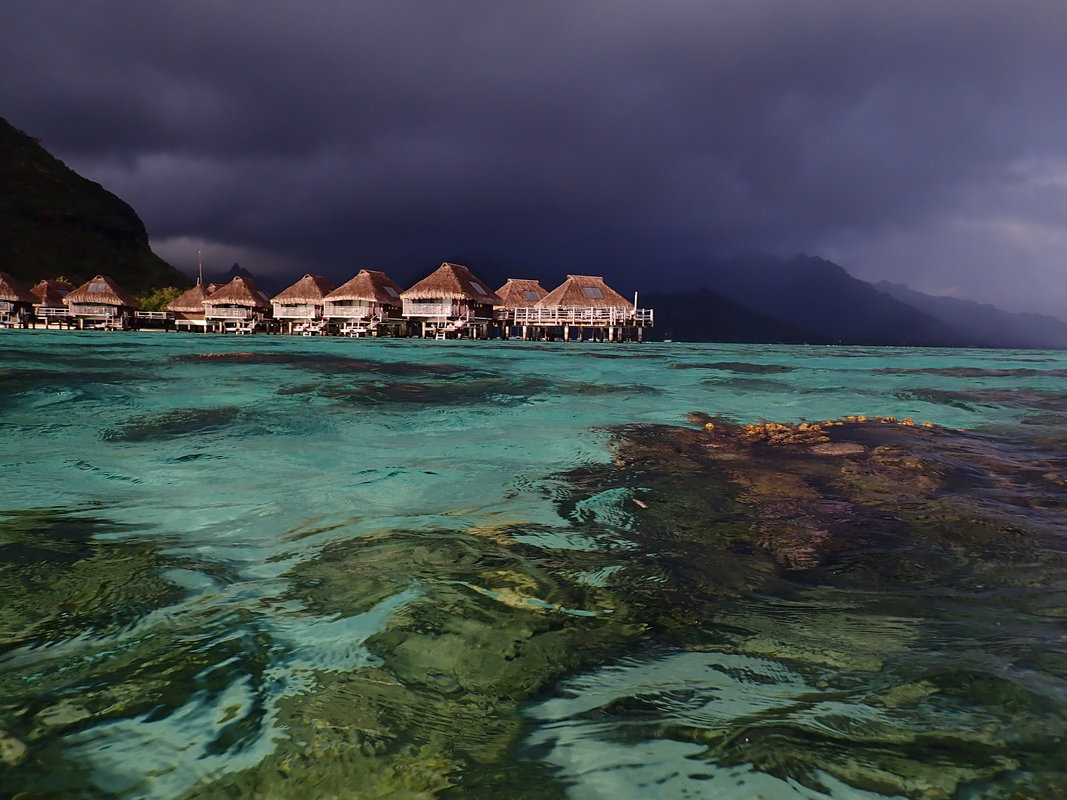